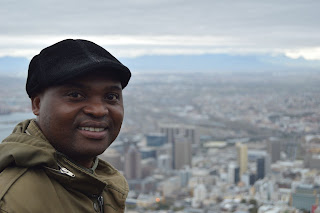 South African writer, Niq Mhlongo has been dubbed “the new voice of post-apartheid South Africa” though it’s a description he’s not that comfortable with. His four books: Dog Eat Dog, After Tears, Way Back Home and his short story collection that recently came out, Affluenza, are set in Soweto, where he was born and raised. The books deal with issues facing the people there, issues such as unemployment, xenophobia, HIV/AIDS, corruption, and racism. His books have been well received and widely reviewed,  with his first book Dog Eat Dog being translated into Spanish and going on to win the Mar Des Lettras literary prize in that country. He’s a highly entertaining participant at literary festivals around South Africa, the continent, and overseas.

Mhlongo received a BA in African Literature from the University of Witwatersrand and went on to study law at the University of Cape Town. He never finished his course to become a lawyer and instead took time out to write his first book Dog Eat Dog, which was published by Kwela (as all of his books are) and the rest, as the say, is history.
I interviewed him recently about his writing, his country and his current book tour.

Your books illustrate many of the problems in South Africa, the “rainbow nation”. Do you think your books can help heal your country?

…South Africa is also known as a ‘rainbow nation’. But looking into this concept at face-value, it romanticizes our nation by suggesting that all is well in this beautiful land. But the realities are shocking, as we face serious problems of racial tensions, unemployment, corruption, land redistribution problems, economic inequalities, failing education systems, homophobia, xenophobia, and so on. My books tackle these problems head-on, and my hope is that they contribute in this ongoing debate. I can only wish that after reading my books, people will interrogate themselves and be inspired to live positively.

You have quite an extensive book tour for Affluenza, is that common with Kwela? It seems to be only cities though, do you think SA publishers could do more for the rest of the country? What role should publishers have to develop the market they sell to?
Some of the events are organized by Kwela, and some I get invited to participate by literary festivals, book clubs, and private organizations. But I must say that Kwela has come to the party with Affluenza, including assigning me an excellent publicist. Indeed this is not common with Kwela, but I think it’s a positive thing going forward and taking literature to new heights. I’m also concerned that these events are only in Joburg, Cape Town and Durban so far, and focus only in the urban communities and not rural. I think it’s also about the question of buying power, and economic inequalities that still need to be addressed in order to level the playing fields. As much as I think SA publishers could do more for the rest of the country, I think it would be unfair to expect publishers alone to change the status quo.

How do you feel South African publishers relate to readers north of your borders?

Well, in my opinion I don’t think there’s any relationship going on at the moment. Or if there is such relationship, I don’t think it’s an active one. South African publishers are more concerned with European and American markets, which is a serious concern. …I guess one of the reasons is that the South African publishing industry is still largely white-owned. Their knowledge and relationship with other African countries is poor.

Do you think an integration of the various book markets in Africa is important? If so how do you think it could be done? Was the old Heinemann series on the right track?
One of the greatest achievements of the Heinemann series was forging strong relationship between Lusophone, Francophone, and Anglophone African communities. I first came into contact with Lusophone and Francophone communities through the work of the likes of Camara Laye, Ferdinand Oyono, Pepetela, Honwana, etc... I’m imagining the time when South Africa publishers would, for example, make sure that my work is accessible to both Lusophone and Francophone African communities. This can only happen when publishers work together around the continent. Not everyone can make inroads into the European market.

What advice would you give an up-and-coming African writer, advice you wish you might have got when you started out?
Be careful not to give away all your rights when you sign a contract with a publisher. Get good advice from other authors because some publishers are hell-bent. Keep reading work by African authors.

If you are on Twitter, on Monday from 3-4 pm our time in Botswana (I think it's GMT +2), TJ Dema (@TJDema) will be interviewing me about my new novel The Scattering. My Twitter name is @LauriKubu. Please feel free to jump in with any questions.

I'm so loving the poster Penguin SA made (below)  which we have had changed into an invite for both the Maun and Windhoek launches. 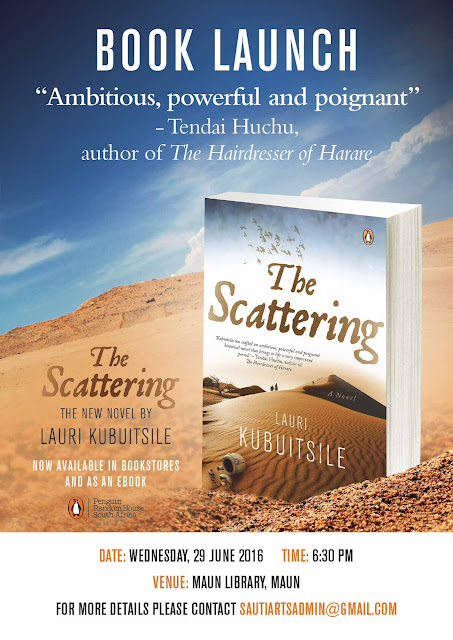 Also I got a lovely Friday surprise- a fantastic review in the South African paper, Business Day. You can read it here. I especially love that the reviewer adds a bit of Riette's speech that I nearly considered cutting:


""Over and over they do it," Riette tells Tjipuka. "Men fight, men make war that destroys everything, and women carry the wounds, they clean it up. They rub it away, and they go on. On and on. And yet men pound their chests and say we are the winners. What? What? What do they win?"
In the long run what, indeed, do we win with war?"
Have a great weekend!
Posted by Lauri at 1:44 PM 1 comment: 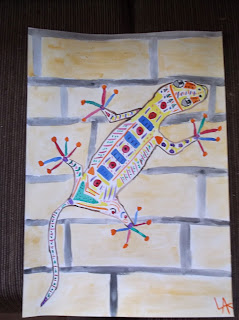 Okay I am frantically busy at the moment. We (me and Sauti Arts and Performance Management) are trying to sort out all of the little and not so little details of the book launches for The Scattering in Windhoek Namibia and Maun Botswana. The Maun one is at the end of this month. OMG!!!

After the launches I'm off to Calvinia South Africa for a two week writers residency, working on the research for my third historical novel. I'm a bit obsessed with history at the moment.

After that my publisher, Penguin,  is trying to organise a mini-driving- book tour, with me driving my new (to me) little sexy car. Driving around South Africa, signing books, maybe talking, heading toward Cape Town where I'll attend The Open Book Festival in September. Busy busy.

I've also started painting again after many many years. Just for fun (the gecko above is on example).
If you'd like to read one of my romance novels FOR FREE- get yourself over to FunDza where they've posted That Kiss in Egypt.