A Review: Fela This Bitch of a Life: the Authorized Biography of Africa’s Musical Genius 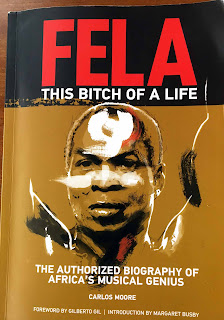 Fela Kuti is undoubtedly one of Africa’s best musicians ever. Fela This Bitch of a Life: The Authorized Biography of Africa’s Musical Genius by Carlos Moore re-published by African Perspectives is as interesting and eclectic a book as was the man it is about. The book was first published in France in 1982, this new edition came out this year with a forward from Gilberto Gil, a note from the author, additional chapters at the end about the last years of Fela’s life from 1982 to his death in 1997, and an introduction from Margaret Busby.

The book is unique in that though it is a biography, it was written from hours of direct interviews between Moore and Fela. Some chapters are written as transcripts of those interviews, in Fela’s voice and in the first person. This is also the case with the handful of Fela’s wives, or queens as they are described in the book, and close friends such as J.K. Braimah and Sandra Smith. This sort of format I found very intriguing and gives the book an authenticity as a near autobiography that other books on Fela could not have.

The book begins with Fela’s early life with his very politically aware parents. His mother was committed to improving the lives of Nigerians, women in particular, and travelled around the world in her work. His father was a Christian reverend who founded a school and was the first president of the Nigerian Union of Teachers.

Fela’s parents sent him to England to study music at Trinity College of Music. It was there where he started his first band. The band eventually went to the United States but they only had limited success there. He eventually moved back to Nigeria and established the commune, Kalakuta, and his club, The Shrine. In 1978, he married his twenty-seven wives on a single day to much controversy. At the time he had only his first wife, Remi. Fela was a complicated person, with an open, progressive, ever-learning mind, but at the same time he held positions that are hard to accept as well. His attitude toward women is one of these such positions:
“Yeh, I understand many things about women…but they are not on the same level with men…equality between male and female? No! Never! Impossible!...It seems the man must dominate. I don’t want to say so, but it seems so.”
Beating his wives also seemed to be a regular occurrence at Kalakuta. Later in his life, though, he developed a more progressive attitude toward women and the constraints of marriage.
“The marriage institution for the progress of the mind is evil…People marry because they are jealous. People marry because they are possessive. People marry because they are selfish. All this comes to the very ugly fact that people want to own and control, other people’s bodies.”

Fela was persecuted by the various leaders of Nigeria because he refused to accept their corrupt and illegitimate claims to power and spoke freely about what they were doing to the people. Fela was a musician but he used his music to challenge the status quo, and to rage at those abusing their power at the expense of the poor. Corrupt leaders did not like that. He was arrested and beaten and imprisoned many times on usually trumped up charges. One of the most brutal attacks occurred at Kalakuta where many of his wives were raped, his mother injured to such an extent that her health was so weakened that Fela believed it was, at least, partly the cause of her eventual death, and the premises were burned down.

After his mother’s death, Fela’s spirituality grew. Through his dreams and his various guides he managed to communicate with his mother. Unfortunately is appears people took advantage of his grief and some were not legitimately there to assist him in his spiritual quest but only to take from him or persecute others. He became paranoid and aggressive because he could not see who to trust.  He also began experiencing trances.
“In that trance I saw the tide change, that this whole earth was going to change into something different, into what people call the Age of Aquarius. I saw that it was going to be the age of goodness where music was going to be the final expression of the human race and musicians were going to be very important in the development of human society.”

When the first symptom of HIV/AIDS appeared, lesions around his body, he saw it as part of his spiritual journey and the shedding of his skin to grow his “new skin”. His refusal to accept his illness led to controversy yet again with the release of his song, Condom, Scaliwag, and Scatter, preaching to the people not to use condoms.

I found Fela this Bitch of a Life to be an interesting, eclectic read about a complicated man; I highly recommend it.

(This was first published in my column It's All Write in the 2 December 2016 issue of Mmegi newspaper)
Posted by Lauri at 2:48 PM 1 comment: