10 Bumps on the Writing Roller Coaster

If you're a writer you know all about the Writing Roller Coaster, unfortunately.

2. Can't find a market for your experimental romance novella about a vampire and a repressed accountant/stuntman who find themselves heading to the apocalypse but take a detour for a jolly cruise-ship holiday. No lit mags are looking for that sort of stuff at the moment. Apparently.  :(

3. Your beta-reader likes the premise for your new novel. You've finished 125 1/2 words of it. It took you all week but they're good words. Really good. Yay.

4. Your short story called  Hamster: It Was Not About the Carrot  did not make the Fancy Literature Only contest's shortlist. :(

6. You are invited to a fancy foo-foo literary festival.Yay!

7. At the fancy foo-foo literary festival, no one knows you, including the person who invited you. :(

8. Your book gets a good review on Amazon. 5 stars even. Yay! and Yay!

9. Your mother lets it slip that she wrote the review at Amazon. And that she hasn't finished your book yet. She only read the acknowledgements that mentioned her. "But it was very well written, Dear." :(

10. You have a new idea for a novel just when you were positive the well had run dry. It's a good one, maybe the best one ever.  Ever ever, like in the history of ideas for novels.  Best not to tell the robot.  :) 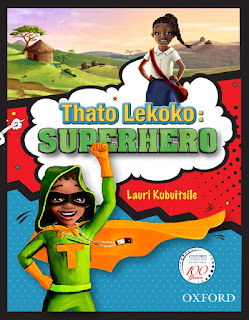 Yay!! This is the cover of my book Thato Lekoko: Superhero, coming out next month with Oxford University Press. This is my second book with this publisher, the first was The Second Worst Thing, which has done quite well.

The blurb at the back of Thato Lekoko says:

Tseke flies through the skies fixing the country’s problems with
her superhero powers. But when she’s not in her lime-green
suit, she is Thato Lekoko, just an ordinary teenager … and
she’s late for school.

While dealing with the school bully, caring for her younger
sister and doing her chores, she also needs to find time to
finish an environmental project without letting down her
best friend Wanda.

But when strange things start happening in the village, Thato
decides to investigate what’s really going on at Siane Gold
Mine. And for this job there are no superpowers; just the
power of being Thato Lekoko.

Wishing my Thato a successful flight!!
Posted by Lauri at 3:59 PM 38 comments:

So I'm back from the Maun International Arts Festival 2015. Still recovering. One of the things I did  was attend the poetry workshop run by Ugandan poet Rashida Namulondo. I don't usually write poetry, only occasionally, and I like to learn more about it whenever I can get a chance.

It was an interesting workshop where I discovered different ways to look at things, different ways to find inspiration outside of yourself. One of the exercises was to try to use words in a new way defined by you but so that the reader/listener can get the meaning. I chose to use colours. Here's my poem, worked on a bit after the workshop.

He’s like orange in that fake way,
Like the way orange looks bouncy and smells sickeningly-happy
But it really isn’t.
He likes to speak about African princesses and stars
Though he only touches them with grey.
That cold, unattached, slippery, non-committed side of grey,
Not the killer side
The side with passion.
I would have welcomed the killer side.
Even just a sliver to know he had it somewhere under everything the world saw of him.
Blue is where he likes hiding
When I insist he cut the bullshit.
When his orange and too-slick grey does my head in.
Blue, all stout and round and sturdy
Rolling, rolling— pretending as if my eyes are immune to blue.
But I see it.
I see him thinking he’s safe there.
I know all about these things.
Blue is part of it- isn’t it?
Part of the problem.
Blue, she lets him hide there
And she makes everything worse.