The Fatal Payout is the first book in the Detective Kate Gomolemo series.There are four books in total: The Fatal Payout, Murder for Profit, Anything for Money, and Claws of a Killer.

The book is about corruption in a road tender that ends up in the murder of one of the clerks in the Roads Department, Kgakgamatso Maipelo. But who murdered her? Is it the ruthless Dan Moore? Is it Kgakgamatso's soldier boyfriend? Or what about one of the men she is playing a dangerous game with?
Detective Kate Gomolemo needs to find the murderer but will her attraction to Kgakgamatso's boss, John Mogami, cloud her judgment? She knows he's hiding something, she only hopes it is not what she thinks it is.

Themes in the Book


Characters
Kate Gomolemo
A detective with the Botswana Police. She has an adult son who is in America studying to be a doctor. She's a widow. Her husband died in a traffic accident, he was a well respected headmaster. She believes in honesty and justice. She is well respected in the police force for her integrity.
John Mogami
An engineer in the Roads Department. He's married to the materialistic Boitumelo. They have two children. Boitumelo's spendthrift ways have put them into financial difficulties that John can't seem to find his way out of. He doesn't like how his life has turned out.
Ronald Simons
He works for Moore Road Works a company that is involved in corruption to get a road tender from John Mogami's department. Though he must be involved in illegal things because of his job, he does not like it and is upset with the way his boos, Dan Moore, treats him. He's an old friend of John Mogami's. He's married with two sons. His wife is very sick which is one of the reasons he must stay at a job he does not like. He's feeling trapped.
Dan Moore
A corrupt, ruthless owner of Moore Road Works. He treats everyone without respect. He will do anything to make money.
Kgakgamatso Maipelo
A clerk in the Roads Department. She is HIV positive and is struggling to pay for her ARV treatment. She is angry about her status and takes the position that she should not die alone. Though she has a steady boyfriend she sleeps around with many men.

Study Questions
Chapter 1
1. What caused Boitumelo to be so angry?
2. Do you think John is happy about his life? Why or why not
3. What can you say so far about the setting of this book?
4. The author writes, "Reluctantly, he took the money and quickly put it in the desk drawer mumbling an embarrassed thank you." What does this tell you about John Mogami?
5. Which lines from the book tell you that John once loved his wife?
6. What plans does Dan Moore have for John Mogami?
Chapter 2
1. There are two problems in Ronald's family, what are they?
2. On page 9 it says that Kgakgamatso only took half of her medicine. What medicine is that? How do you think taking half will affect her health?
3. Kgakgamatso spends most of her nights at the club, usually taking a strange man home with her. What do you think about this? What does this tell you about Kgakgamatso?
Chapter 3
1. Describe KB.
2. Why did Boitumelo go with KB? What do you think about that?
3. What did John mean when he said that Dan Moore had people "in his pocket"?
4. Why do you think John will agree to take the bribe?
5. If you were John what would you do? Explain.
Chapter 4
1. Who is Clyde?
2. What did Kgakgamatso overhear? How is this useful to her?
3. Do you think Kgakgamatso's plan is a good one? Why or why not?
4. So far you've learned quite a bit about John Mogami. What can you say about his childhood?
Chapter 5
1. Why is Kgakgamatso depressed at the beginning of the chapter?
2. Who is Peter Tau? Why is he angry with Kgakgamatso?
3. What made Clyde sick?
4. What is Kgakgamatso's argument for her behaviour? Do you agree with it? Explain.
Chapter 6
1.Give three things Ronald feels has gone wrong in his life.
2. Why did Kgakgamatso call Ronald?
3. At the end of chapter 6, name everyone who is on their way to Kgakgamatso's flat.
Chapter 7
1. Describe Detective Gomolemo.
2. Why is Boitumelo crying?
3. How was Kgakgamatso killed?
4. Below are five suspects for the murder. For each state what their motive (reason for killing) for the murder might be:
a) John Mogami
b) Peter Tau
c) Dan Moore
d) Ronald Simons
e) Clyde Gobotsamang
Chapter 8
1. What happened to Kate's husband?
2. Why do you think the book is titled The Fatal Payout?
3. Give two ways that Kgakgamatso "ruined" Peter Tau's life?
4. What is an alibi?
Chapter 9
1. What does John mean when he says Boitumelo wanted the money now she "must sit back and accept the consequences"?
2. How has John changed in the four days since Kate last saw him?
3. Why does John feel that both he and Kate have lost their spouses?
Chapter 10
1. What did Thato find in Dan Moore's desk? Why is this important?
2. What did Thato mean when she said "blood is thicker than water"?
3. Kate is frustrated and decides to change her approach to the case. What does she do differently? How does this help?
Chapter 11
1. What important information does Clyde give Kate?
2. Why is Kate so affected by this?
3. Why do you think Thato asks Solomon about the date of Kgakgamatso's murder? Why is this important?
Chapter 12
1. Why is John not mentioning Ronald's note?
2. Does this tell you anything about John's character? What?
3. Why is Kate questioning her instincts?
4. Who dies in this chapter? How?
5. How do you feel about Kgakgamato's murderer?


The Fatal Payout is prescribed by The Botswana Ministry of Education for junior secondary schools.

The second book in the Kate
Gomolemo Detective Series:
Murder for Profit- published by Pentagon Publishers 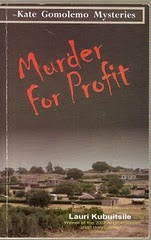 Four children and their grandmother have been found in a burned hut. At first it appears to be an unfortunate accident but a note scrawled by a childish hand brings Detective Gomolemo to Mogobane where she soon realises that five innocent people have been killed.

As she digs under the surface she uncovers the unspeakable reason- ritual murder. For power and greed these innocents had to die, but Kate will not let their murderers walk free- no matter what cost she must pay in the process! 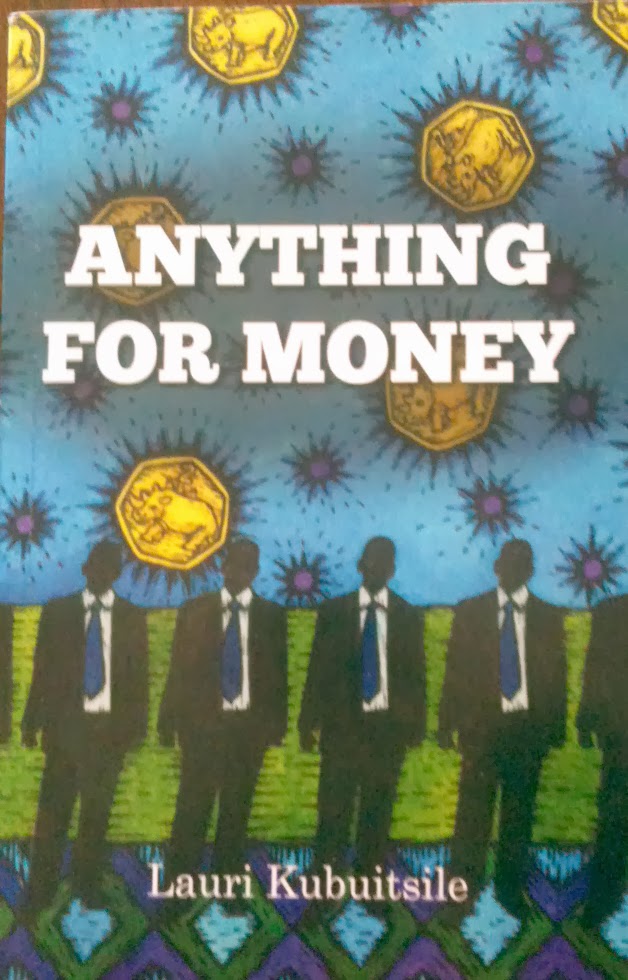 Detective Kate Gomolemo is not sure what to make of Helen Segole's wild allegations. She's claiming government ministers and high-ranking civil servants are behind the cold-blooded murder of her father, but Kate wonders if Helen is not confused by the grief she's feeling.

Against her better judgement, Kate agrees to do some investigations and suddenly she's swept into a high-rolling, dangeorus game of power, greed and corruption. The people behind it will stop at nothing to get what they want. How many people will have to die before Kate finds Goitsemang Segole's killers? And will Kate be one of them? 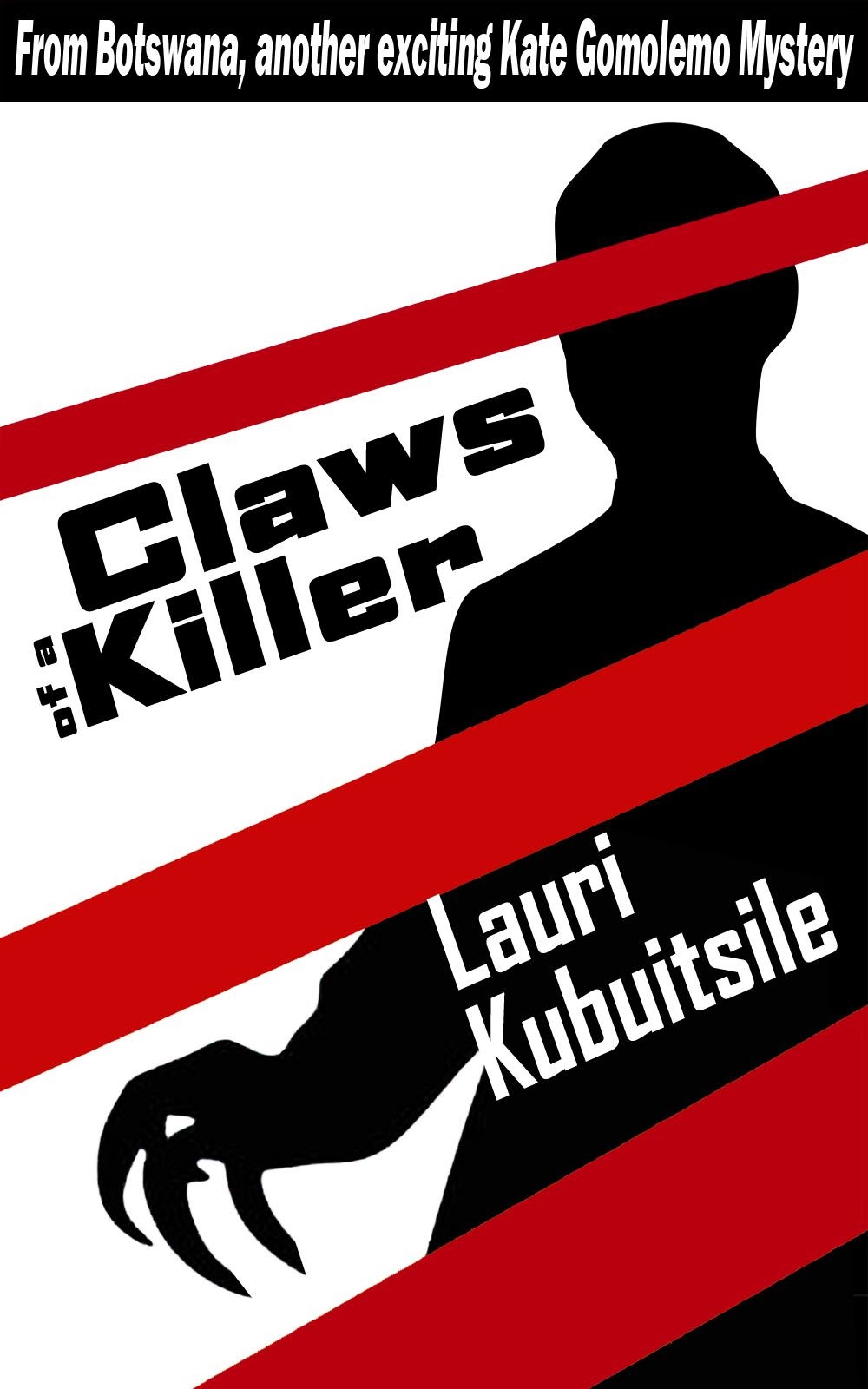 As the days pass the pressure builds.
Will Kate be able to stop him before this monster kills again? She'll risk everything to catch him and in the end she almost does.