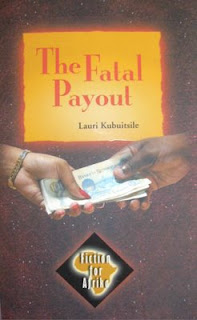 I've been away for a week to Gaborone for a radio scriptwriting workshop. It was very good. The facilitator gave wonderful information about radio writing, but also information for writing in general. I learned so much about writing English scripts for the beginners in standard one, that I feel I need to go back and nip and tuck the 16 scripts I've already finished in that series- that was not such good news. Also I got to interact with people, some old friends I hadn't seen for awhile, some newly made ones . It made me realise how little I socialise nowadays, excluding my running commentary with Sgt. Catman, but to be honest he is not much of a conversationalist.

BUT this is a post about good news- and there was good news. Last week Tuesday the list of prescribed books for secondary schools came out. What I knew was I had one chance with a science textbook I wrote for junior secondary, form 1. Luckily, I was misinformed. Macmillan had submitted my book, The Fatal Payout, for senior secondary and it was chosen as the ONLY set book for literature! The science book wasn't taken, but that's fine actually because I'm so over the top pleased about my dear Detective Kate Gomolemo. There are four finished books in the series but only two are published. Since they've been doing so badly, I swore the other two would never see the light of day. Perhaps I'll change my mind now.

The other equally lovely news was that my writing partner's (She Who Will Remain Un-named) short story collection for junior secondary was chosen as a prescribed book too! It was funny because we were both sitting in the workshop when we found out. How that went is a funny story in itself , for another day perhaps.

So now, I have six published fiction books and five have been prescribed as set texts by the Ministry of Education. In this part of the world, where even in South Africa a best selling novel will sell 4000 copies , this is a jackpot. The primary school books for example, I might sell above 20,000 copies per title the first year. The new policy is to keep set books for 3-5 years, so I'll still be making fairly good royalties during those following years too.

What does this mean to me? I'm a full time writer. Lately I've been lucky with two television scriptwriting gigs in a row, so money has been regular and pretty good. Before that, it meant me doing piece meal. I might do a few radio scripts, write two or three articles for our national private daily Mmegi, some local magazine articles, the occasional international gig. It was constantly querying, constantly working on two or three articles, trying to run after government official for facts (this alone can take days in Botswana where PRO in Government of Botswana-speak means expert at dodging journalists), setting up interviews, researching, running up and down- basically a lot of work equaling piles of time consumed and usually a small pay cheque, leaving only a few precious minutes here and there for my fiction, the thing I most love writing, with the bulk of the time eaten up trying to earn a living.

Now these better royalty cheques will translate into time. Time for my fiction. Time to write anything and everything that I want. The big hammer of reality will finally get a rest. Not everything I put on paper must already have a market. That money equals freedom-freedom, what a lovely, lovely word that is.
Posted by Lauri at 10:39 AM

Oh brilliant, that is such lovely news! Yay, am jumping up and down for you!!! Set text? Wow!

Thanks for sharing in my excitement ladies, it means a lot.

Congratulations! What wonderful news for you (and your writing partner). I do wish your books were available here in the states (or are they already and I've just missed them?)

Karen- still no books online. It has something to do with banks here. My publisher tried to explain but I went all blurry eyed. Thanks for your congrats.

Ayo-Nice to see (read?) you around here. Thanks for your good thoughts.

I'm so happy for you. Wonderful to read good news.

Elizabeth thanks for your kind thoughts.

Well done, Lauri! A big CONGRATULATIONS! This is really great news and I know you deserve it.

Thank you Rre Dibia- your support is always appreciated!

That is absolutely brilliant news. I am so pleased for you. I hope this means we will get to read/buy one of your novels or collection of short stories someday soon. You really deserve this because I know how incredibly hard you work. It has made my day to hear this!

Selma thanks, as always for your kind words. I think for the time being my books seem to be trapped within the broders of Botswana but hopefully the freedom I'm seeing ahead will mean working on books with a more international flavour. Then - watch out!

I saw in my eamil you left a lovely message on the Whiplash thread but strangely it's not on the blog. Thanks for your kind words.