I'm Being Terrorised by my Dining Room Table

I've always blamed my lack of adult behaviour on my patchy upbringing. When I get scared by skincare products or don't know the reason why all plates on a table must match, I blame it on my parents. They were busy with their own dramas and teaching me about how to fold a cloth napkin just wasn't high on the list. To make things worse, I'm not a girly-girl, I never was. I only knew bras and panties were supposed to match each other when I learned it on a recent Oprah show. The same goes for the way my family is run. The mother is apparently the leader in all things domestic, but if your leader has no guidebook you're likely going to go astray, it's almost assured.

Families have all sorts of secrets, ones they don't even know they have, and mine is no exception. We just hobble along not knowing we're doing things wrong, that is unless a stranger enters your home. Once the stranger is let in, the scowling look, the disdain in his eyes tells it all. You have violated a sacred domestic law. Anyone would know it- why don't you?

A stranger has entered our home. He is out of our league. We don't know people like him, we never have. And he seems to have a standard that we are not living up to no matter how hard we try. I feel terrorised in my own home. But it's too late. He's been invited, everything has been paid. There is no turning back.

Regular readers of my blog will know I recently built an office and moved into it. This left a gaping hole in our house. Apparently that hole in other homes is called a dining room. After a bit of research I realised what we needed was a dining table to take up all of the space in this new dining room. I innocently went out and bought one.

And now it's here. 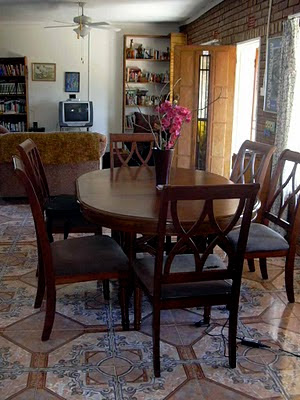 I think it's obvious this dining room table has no business in our home, in a home headed by ME. Evidence can clearly be seen in this photograph.

Exhibit A: The chaotic, over full bookcases in the background.
Exhibit B: The shiny, pristine gloss of the unscratched table top.
Exhibit C: The carelessly flung computer cable in the foreground of the photo
Exhibit D: The cat hair-less olive cushions on the dining room chairs

The evidence is clear. This table does not belong in this house. It is a stranger. But it stays. It imposes its ways on us. We seem unable to withstand its demands.

As you can see I bought a vase- no more empty mayonnaise jars for flowers brought in from the garden. The Table will not have such behaviour. I've bought a tin of Mr Min- and I use it. My god- I'm even considering buying coasters and table mats!

Be warned by what has happened to my family. Offices are all well and good- but beware the gaping hole that remains behind. It may force you to do things out of character, it may have you inviting terrorists into your own home and, believe me, that can never come to anything good.
Posted by Lauri at 7:00 AM

haha! This stranger, the one who has invaded your home, is - I must confess - a very handsome stranger. I would let him stay if I were you!
Judy

Ah, I can see how he lured you in with his depth of shine and his elegant richness - but you should have remained strong, Lauri. That way you could have continued to offend others outside your home.

We have a dining room table. We bought it 23 years ago at a second hand store for $100. A little voice has been whispering in my ears for YEARS that I need to replace it. It is too old. It does not shine and does not even approacj elegant. It is too small for company )or grandkids); It doesn't come with fabulously magical leaves that store underneath and expand it to seat 12. It's very lack of penache just begs passers by to sit ON it (instead of AT it) or even to *gasp* stand on it to clean the ceiling fan or hand balloons for a party.

However, it is rugged and indestructable. It's formica top cannot be scratched, and it makes wonderful tents for the kiddos.

Perhaps a new table - a shiny table - a fancy table - a bigger table - would be better. At the very least it would eliminate embarassing confrontations with friends when my children sit on THEIR table and they chastise them saying, "What do you think you're doing? Would you sit on your table at home???"

Hmmm. Perhaps I am right to keep our old familiar table - our friend - instead of trading him in!

Hopefully yours will grow and meld into a happy friend that with meld with your household - after a few scratches!

Like you, I have a new dining table. On it is a raised tray on which are several of my collected short candlesticks. Adjacent to the dining room, it must be such because there is a dining table, there is a respectable living room. Any delivery person or casual visitor can relax and enjoy the DR and LR. These two rooms are separated from the rest of the house by a kiddie gate. It's a toss up if the gate is meant to a) keep the dog from the LR and DR, b) keep people out of my office/disaster zone or c) to keep visitors from the remainder of the house where books stack themselves every which way, groceries wait to be sorted into the pantry, and various bags and boxes of stuff for charity have accumulated. Sometimes the gate acts an erosion barrier, stopping mixed media and castaways from slipping into the DR. I get it Lauri, but I'm still envious that you have an office apart, with a fireplace!

Lauri - I think your new addition looks right at home ... or maybe I should say the intruder made itself right at home. Now you have to act like a grown up with the whold shebang of fine china and crystal goblets. : ) Very lovely indeed!

Watch out. Soon you'll be dressing it with a French linen tablecloth and a china tea set and all will be lost. One should not understimate the all-consuming power of the dining table!

Judy- He has to stay I've paid him off.

Groovy- Do not get rid of your table. Learn from my mistakes.

Bonita- Clever girl using the gate in such a sensible manner.

Lyn- Please don't say such things- He might hear!

Selma- Believe me, I know His power!

Love your story. You're your own person and following trends and rules and conventions is for the non-creative types.

You will get used to your new table. The stranger won't be a stranger for long. You could dress him up in a tablecloth made of local fabric, a kikoi or equivalent.

Congrats on your publishing success!

When you face a stranger, get to know her or him. Many people ... and dining tables are nicer than first impression >:)

At last,Laurie, I make the time to first, start reading your books, and second, since I ejoyed 'Mmele...' so much, to see if I could find your blog. And what a fun evening I've had reading blogs for the first time. It's been almost 2 years since I met you at Westwood school at Bonty's exciting production for her book, 'The Seed Children'. Your table looks lovely and I wish you many hours of joy with it.

Linda what lovely kind comments. So happy you enjoyed Mmele. Thanks so much for passing by. I was just with Bonty in Cape Town, there's a photo of her stand in the post about CTBF.