The Cover of my New Book- Signed, Hopelessly in Love 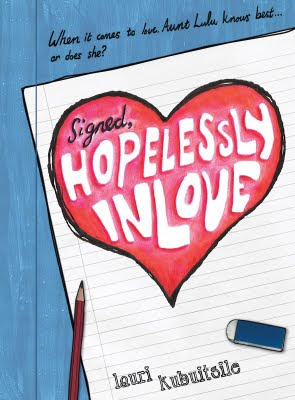 The book was initially called Aunt Lulu, the name it had when it was shortlisted for the last Sanlam Prize, and it had a different cover but the sales people found that it wasn't very popular so we changed the title and the cover. I like this cover MUCH better.

Below is the blurb I wrote, though it will still be edited a bit by Tafelberg, just to give you an idea what the book is about.

For Amo her future couldn’t have looked brighter. She’s on track to becoming a famous journalist for CNN, is best friends with the (future) first Motswana woman to go into space and , if everything goes according to plan, she’ll marry the fabulously handsome head boy, John Gababonwe… though he doesn’t know about it just yet.


Everything was right on track, that is, until she’s asked to run the agony aunt column, Aunt Lulu, for her school newspaper. Amo takes it as an insult. She’s a serious journalist! She’s written hard hitting pieces like-“Do Prefects get More Meat?” and “Is Writing Notes Harmful?”. One day she’ll be known all over the world for uncovering dangerous stories with her finely tuned investigative skills. She can’t be Aunt Lulu! It’s not journalism, it’s fluff -and Amo is definitely not about fluff.


But then an anonymous letter arrives from “Hopelessly in Love” and Amo is sure she knows who the fabulously handsome writer is and she is even more certain he is writing about HER! Suddenly everything looks different and, on second thought, Amo decides that this Aunt Lulu gig might not turn out so bad after all.

Lovley cover and great title, Laurie. They both suit the blurb very well (and the story sounds like a lovely romp!)

Thanks Judy, I'm crossing fingers it does well.

I'm sitting here with a big smile on my face. Love the cover. Love the blurb. Such fun! Congrats.

I'm so glad, Sue. I hope many (many many) people will feel that way.

I love the new cover, and the blurb - it sounds like lots of fun! well done

I love it! I think much more appealing than Aunt Lulu, yes!

Just read your previous post, re the e-book idea, and actually I had been at the point of writing to you to find out how I can buy some of your books! Went to Francistown, but the traffic was so ghastly we never made it to the Botswana Book Centre, and we have no such place up here. I will look around your blog to find your email address, and will get in touch that way!

Hi Karen! It really is quite difficult to buy my books in Botswana. I do have four now prescribed in schools here. If you have any booksellers (who supply schools) in Kasane they might have them. They're The Fatal Payout, Mmele and the Magic Bones, No One is Alone, he Brings a Message and The Ram. The first one is for junior secondary school and the others for primary, though I think still interesting for adults.
Thanks for your comments about the book.

I really like the cover and the title. It looks like something sa teenager would doodle in their english folder while they were at school. The blurb is excellent. I'm sure it'll be a great success for you!