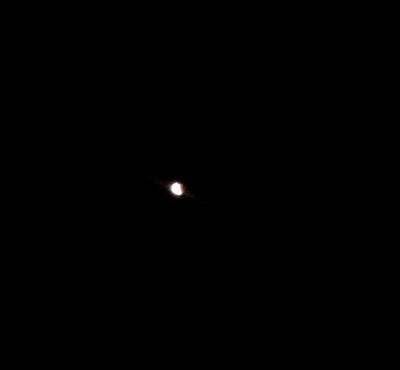 Last night I braved the cold to watch the show put on by the cosmos. Excuse the photo, it was taken with my iPhone. I knew it wouldn't be any good, I just wanted a record that I was there.

For me the most interesting part was seeing the shadow of earth on the surface of the moon. I was, in a different life, a science teacher and I understand (at least in a certain part of my mind) that we live on one of the planets in our solar system. We have one sun and one moon. I understand how those bodies move around. But something shifted in me when I saw the shadow of the edge of our planet up there on the moon. Suddenly I understood where I was. The reflection of our planet so far away up there gave me insight into this home of ours. Suddenly the ground on which I stood meant the same thing as the planet called earth. Seems simple and straight forward but until last night I didn't really get that.

I wondered last night if maybe that is what we all need to get true insight about ourselves, to see our reflection on someone or something else. We may think we know a lot of things about ourselves, but maybe we only know them to a limited extent. Perhaps the true definition and understanding of ourselves cannot be found within us, it must be found somewhere out there.

In Setswana culture there is something called botho. Botho is a term used to describe a mature, polite Motswana. A person who shows respect to others, who is disciplined, well mannered and courteous . You gain botho through your interactions with others. Perhaps botho is a bit like the shadow of earth on the moon.

Coming from a family with mental illness, I've never quite trusted the inside of my head. Sometimes I think that may be why I write. I trust words on the page. So if I get the words out of my untrustworthy mind and on the trustworthy page I can see what they mean, what I mean. Maybe that's a bit of the shadow on the moon too.

Perhaps I'm rambling. Just my thoughts after last night. What did you think about the eclipse and our shadow way up there?
Posted by Lauri at 11:05 AM

I didn't even know there was an eclipse. Could it be that we couldn't see it here in the U.S.? Or did I just miss it because I was inside at a conference?

I watched the eclipse here in Maun, together with some friends,it was so exiting,and yes it did help to identified where we really are in our solar system.It also reminded me how perfect all the planets are,how they work together just like clockwork.

Helen- It wasn't for your side of the world, so you didn't miss anything. But it was fantastic this side.

Roger- I wonder what the animals up there in the Delta thought of the moon going all crazy like that. And yes, the perfect synchronicity is awe-inspiring.

Insightful Post Laurie - I caught glimpses of the eclipse through a chilly cloudy sky ...

Unfortunately I did not get to see the eclipse, but I remember being woken up by my dad in 2001 to go and stand outside and look at the red moon.

I have always been fascinated by the cosmos and frequently watch videos and programs that can tell me more about the multiverse we live in of which we are just a small part.

Also, there is so much truth to what you say about understanding who we are by seeing a reflection of ourselves through another person's eyes. I think that is what is so important about having good friends and a great family. They can be the ones on whom your shadow is cast so you can understand yourself better!

I think I experienced the same feeling as you did when I witnessed the most amazing eclipse in Fiji, three years ago. I have finally got my author website up and running today and you mentioned you'd want to see it. If you're interested come over when you have time. I'm still trying to figure out the whole WordPress thing. Love it though. If you have questions I'll be happy to answer what I know.

I often think about how I appear to other people. I was having a discussion about this very thing with a friend of mine the other day, actually. Interestingly enough, we both viewed qualities the other person viewed as weaknesses, as strengths. And she made a lot of observations about me (in a good way) I would never have considered. I think that sometimes we live so tightly in our own heads we can't see ourselves as we really are.