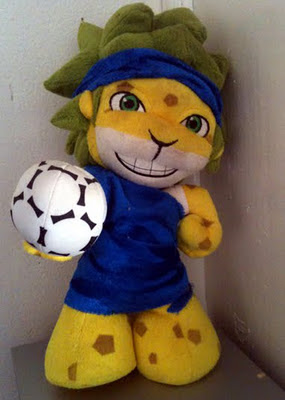 In a surprise twist of events today, former 2010 World Cup icon, Bokumi (formerly known as Zakumi), confirmed that he has thrown his substantial weight behind Botswana's Zebras in tonight's Group D opening match at the African Cup of Nations (AFCON). In an exclusive interview with Thoughts from Botswana, Bokumi said, "The Zebras have what it takes to bring the Black Stars of Ghana to their knees."

This will be the Zebra's debut at AFCON having been the first team on the continent to qualify for the tournament and recently voted Africa's Team of the Year. Despite this, "misguided" ( Bokumi's words) commentators have dismissed the team as inconsequential to the results of the tournament.

Pundits have the Ghanaian team as favourites in the match but this does not deter Bokumi. "Who ever thought a yellow and green lion with , frankly, a pretty creepy grin, would have been chosen to be the mascot for a massive event like the World Cup? Underdogs, you need to keep your eye on them. They're slippery and they've got a point to prove."

Though famous prophets like TB Joshua have shied away from making predictions for tonight's match, Bokumi is willing to put his money where his mouth is. "2-1 in favour of Botswana."
Posted by Lauri at 2:03 PM

yah,he was right we make those 2 attemp for Ghana ,and Ghana didn't do anything much,no matter what we are the winners

As far as I'm concerned Botswana won that game, it was a moral win in any case. it was obvious they were scared, frightned of the hype the first half but as soon as they let their eyes see that Ghana wasn't a monster, they engaged. The second half was magic. If it wasn't for the unfair play that led to a red card it would have been a draw.

hi poster, you said tb joshua shied away from prophesying about this match. surely, as a prophet he only speaks what is revealed to him by God? so it is not tb joshua who chooses what he prophesies about! if God doesn't speak to him, then he cannot talk about it. why are you making it out as if propheycy is some kind of game? it's not, its mega serious

I agree with Lauri.

Good luck to Botswana. Sorry they lost against Ghana.

The Ivory Coast is my favorite to win the AFCON, because they've got Drogba on the team >:)

This is a good blog for anyone who wants to know about affiliate jump.Thanks for sharing such a nice information to everyone. Damiana