The Human Nature of Birds 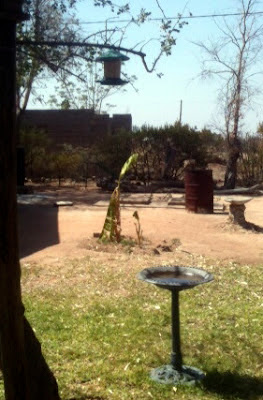 Outside of my office window is a birdbath and a bird feeder. I spend a lot of time looking out at the birds, trying to think of what to write, to work out plot problems, try to get to know my characters in my head a bit better. It's a useful little set-up.

The bird feeder is relatively new. I used to just feed the birds on an old broken cement bird bath further down my garden, but I saw this bird feeder during a trip to Gaborone and thought it would be a nice addition to my little bird sanctuary.

We filled it with food, put it up, and waited. A month passed, and though the birdbath was nearby and many birds would sit on the branch that the bird feeder hung from, not a single one took the chance to check it out. Another month passed and still the bird feeder was full. We tried various things, setting it on the ground, removing the red wire that it hung from, but nothing worked.

Then during the third month, one brave bird tried his luck. Before the end of the day birds were flocking there, the feeder empties now in two days.

Why did it take so long? And what was different about that single bird that took the risk that allowed all of the others to see that there was no fear to step into the unknown?

Sometimes three or four birds will be at the feeder eating without troubling each other. Eating, minding their own business. But other times, a certain bird will not allow any other bird to eat while it is there. The type of bird varies, but every once in a while a greedy bird arrives who, sadly, is also a bully.

This happens occasionally at the birdbath too, but not with such vehemence. The small space of the bird feeder combined with a quite valuable resource, the bird seed, seems to bring out the more vicious side of particular birds' natures.

I can't help but think about us, about humans, when I watch the behaviour of these birds. Among us are the timid ones, the greedy ones, the brave ones and the bullies. Not such a bad set-up for a writer, like I said.

Hehe yes, great observations ... I'm amazed that it took so long for them to 'discover' the seed - here in the desert I have a bird feeder too and when I rise in the morning they're already waiting for me ... chirping noisily and fighting in the branches above me ... I also wonder why they're fighting and also if the loud chirping is to alert other birds to the food scource