The Scattering is out!!!! 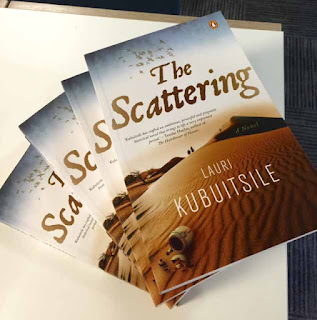 My first adult novel, The Scattering, is now out! The historical novel is published by Penguin Random House South Africa.

Below is the blurb from the back of the book and found on Penguin South Africa's page for the book:


About the book:
‘I, the great general of the German soldiers, send this letter to the Hereros... Any Herero found inside the German frontier, with or without a gun or cattle, will be executed. I shall spare neither women nor children. I shall give the order to drive them away and fire on them. Such are my words to the Herero people.’

South-West Africa, 1904: When German colonial authorities issue an extermination order, the Herero are forced to flee into the desert and seek safety in British Bechuanaland. Tjipuka, a young Herero mother, escapes the massacre with her baby, but is captured and put to work in the death camps in Lüderitz. There she has to find the courage – and the will – to survive against all odds.

The Transvaal, 1899: Riette’s nursing ambitions are crushed when she is forced into marriage with an older neighbour. When he is taken captive and their farm is set ablaze during the Second Anglo–Boer War, she and his daughters must face the horrors of the British concentration camps.

Against the backdrop of southern Africa’s colonial wars at the dawn of the twentieth century, The Scattering traces the fates of two remarkable women whose paths cross after each has suffered the devastation and dislocation of war.

Moving and intimate, Kubuitsile’s novel provides a fascinating glimpse into the indomitability of the human spirit.

********
The book is available in book stores in South Africa and Botswana (Exclusives) and here at Amazon.
Posted by Lauri at 3:10 PM

Good luck with the new book Lauri. It sounds like a remarkable story.