We're off to Namibia!! 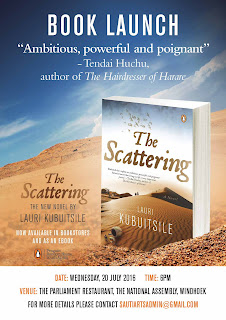 Tomorrow we leave for Namibia for the second launch of The Scattering in Windhoek! It's Wednesday 6 pm at the Parliament Restaurant at The National Assembly. Books will be sold at the launch by Book Den. Our MC for the evening is Namibian writer Sylvia Schlettwein.

We'll have poetry from Charles Kakomee in English and Otjiherero. He is a multimedia artist and poet living in Maun Botswana. His knowledge, skills and understanding in the field of art extends from visual to performing art. Moreover, he is a comic book artist and has already published one comic book under his name with a second edition due for publication this year. He is also a contemporary poet with a collection of unpublished poems. Charles writes poetry in three different languages: English, Otjiherero, and Setswana and has performed in major poetry sessions among them Maun International Festival and Poetry Month opening session in Windhoek-Namibia.


Umundu uoWandu (the stage name for Nandasora Ndjarakana )  will also give us poetry.   He is based in Windhoek and  is a descendent of the  Herero-German war veterans and was born in exile in Botswana. He is a Omumbanderu Cultural activist, student of African history, pan-Africanist, teacher (of Design and Technology, and Guidance and Counseling/Life Skills) and has taught in both Botswana and Namibia. He likes writing poetry especially on relationships and Pan-Africanism.

We will also have poetry from Prince Kamaazengi Marenga. He is a Pan-Afrikan Poet, and a former ‘’prisoner’’ of the European classroom system who escaped the ‘’school dungeons’’ to learn how to ‘’read, write and think’’ without restrictions, following his own curricula. His spirit found ''home'' in the following words by Ngugi Wa Thiongo ‘’A person without a consciousness of his being in the world…is lost and can easily be guided by another to wherever the guide wants to take him, even to his own extinction’’. His poetry anthology titled P-O-E-M-S (Pieces Of Enlightenment Molding Society) is set to be out in early next 2017.


We'll have music from Katini, a singer, rapper and poet. She experiments with House, African classics/folk songs, Motswako, and RNB/Neo soul—though she is open to and learning music across genres. She’s also a keen DJ. Katini aspires to be a multi-instrumentalist with African drums and piano high on her list. She has been part of bands such as Perfect Pitch and rapper Zeus' live band. Some may also know her as the previous singer and DJ at Phikwe's Cresta Bosele. She is now based in Maun where she has done shows on different stages with artists like Ras Diva and Maya Roze. Attracted to art and socio-economic issues, she was previously engaged at Tharientsho Storytellers and is now part of the Poetavango Collective and the team behind the experimental Botswana arts website Diamond Selektion (www.diamondselektion.com)

I'll be in conversation about the book with award-winning Motswana writer, Wame Molefhe.
She is a writer from Botswana, born in Francistown and has lived most of her life in Gaborone. Her fiction has been published in local and international journals, anthologies and online including the UK journal Riptide and The Edinburgh Review, among others.

Just Once (MediPublishing 2009), a children’s collection of short stories is her first book and is a set book for junior secondary schools in Botswana. Go Tell the Sun (Modjaji 2011) is her second short story collection.

She has written a column for the New Internationalist (UK) , writes travel articles, and has written for both TV and radio. Her story Six Pack was highly commended in the 2007 Commonwealth Short Story Competition and she was a finalist in the 2009 PEN/Studzinski Literary Award in 2015. Her short story, Blood of Mine, was adapted into an opera and performed in Cape Town at Artscape.

She is currently doing her master’s degree in creative writing at Rhodes University in Grahamstown South Africa.

We hope to see you there!