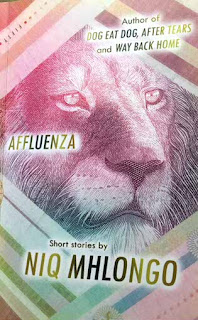 Affluenza is the latest book from South African writer Niq Mhlongo. It’s a collection of stories set in modern South Africa, post-Independence. The stories cover a wide range of topics from love to murder to HIV/AIDS and materialism, a seemingly eclectic mix.
The Warning Signs is a story about land invasion and the issues around the morality of land ownership. A white Zimbabwean, Mr Adams has now moved to South Africa after being kicked off his farm in Zimbabwe, only to find the same thing happening again. He’s not a sympathetic protagonist in that he is racist and treats his workers badly, but still the story shows the issue from his side too, with a sad surprising twist.
Goliwood Drama is a story played out again and again, not only in South Africa but all over the world, the story of questionable paternity. Thami is sure that the last born child with his estranged wife is not his. At the court, he demands a paternity test but no one is ready for the secrets it will reveal.
The suicide of a university student is at the heart of The Dark End of Our Street. Four Blocks Away is about love and the search of a condom in a foreign country when your woman is waiting back at the hotel.  Betrayal in the Wilderness is set in Kruger Park where a horrible accident plays out.
In Catching the Sun, Ngwako is visited by some strangers from the Eastern Cape. The strangers come bearing sad news that Ngwako’s daughter has died in a car accident. Ngwako’s response is surprise since he knows his daughter is studying at university. But these strangers have more bad news for him. Not only was she in a car far away from university, she was with their son who she was planning to marry and the child they had together. Ngwako’s response to this news is unexpected.
My Name is Peaches is told in first person from the perspective of a young woman who is speaking to a dead man about the many secrets revealed at his funeral. The Gumboot Dancer looks at the extent a man can go to get the woman he wants, even lying about his friend. While The Baby Shower shows how badly a woman can want a child, so bad she can resort to horrible deeds.
Passport and Dreadlocks is about a group of men off to Vic Falls on the quest to find rich, foreign women to sleep with, mooch off of, and hopefully get married to like one of their friends famously did. But things go wrong even before they leave when Two-Boy’s dreadlocks—the apparent key to catching foreign rich women—have been stolen along with his passport.
The title story is Affluenza, referring to a disease suffered by people in Joburg where they are willing to buy the most expensive car or suit, but live in debt and in a shack. In it, Fana is meeting his friend, Sanele, at the nearby bar. Sanele is getting married and tonight is his surprise bachelor’s party. While waiting for Sanele to pitch up, Fana meets some beautiful women at the bar and he invites them to come along for the party. What happens next typifies the affluenza disease.
Though the stories seem to have no clear theme, for me they often show a sort of behaviour lacking in humanity at that moment, where getting what you want is paramount with no sense of what is right or moral. It seems as if Mhlongo is acting as a warning bell to us all— chasing money, chasing sex, ignoring commitments, violating basic cultural practises and the dignity of those around us, will lead to our demise. Change your ways, the stories seem to say. In so many of the stories, if only the characters would have chosen the right thing instead of the easy thing or the one motivated by greed, the endings would have been better, happier. I wondered as I read, is this the people we are now? Chasing money at all cost, the next drink, the next lay? I hope not. I feel the author hopes not too, that he offers these stories as a mirror to us to see the truth and to change our ways before it is too late.
Mhlongo writes in simple, solid language— my favourite— telling stories many might want to avoid. He seems to be poking fun sometimes at his wayward characters and the disastrous choices that they make. An interesting collection you would not want to miss.
(This review first appeared in my column, It's All Write, in the 11 Nov, 2016 edition of Mmegi)
Posted by Lauri at 12:02 PM