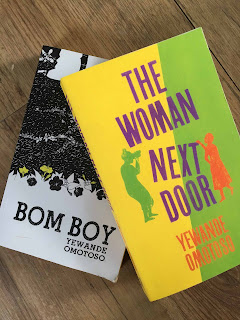 Yewande Omotoso was born in Barbados, grew up in Nigeria, and has lived in South Africa since 1992. Her first novel, Bom Boy (Modjaji Books), which came out of her MFA in creative writing from the University of Cape Town, was published in 2011 to much critical acclaim. It won the 2012 South African Literary Award for Frist Time Published Authors, was shortlisted for both the 2012 Sunday Times Prize and Mnet Literary Awards and in 2013 was runner-up for the Pan-African Etisalat Prize.
Her latest book, The Woman Next Door, came out in South Africa last year, and will be published in the USA this year where the literary website, The Millions, has pegged it as one of “the most anticipated books for 2017”.  I was lucky enough to have a chance to interview her about her success, creativity, and her current work.
You’re an architect by training, a creative field. Is creativity paramount for a writer?
I’m not sure how one measures what is most important when it comes to writing fiction. The act itself, like so much else, even tasks not categorised as The Arts, is a creative act. And if you’re going to be making up people with any sense of “truth” to them then empathy is important. Audacity and courage too. Patience. Tenacity. Maybe paramount is simply the will to write. As in a kind of disease (!) or a real hunger, a “have to”.
Bom Boy had a lot of success, how has that success affected you and your writing?
I don’t know if it’s affected me/my writing as such, the way my upbringing affects me or the country I live in, the people I love or the language I speak. I’m not sure “success” should be permitted that kind of effect. However when a book is received generously that is massive encouragement. I felt and still feel so incredibly thankful. I took the kind reception and I combined it with whatever it is that motivates me to write and I used it to keep going. John Berger said “writing has nothing to do with success it has to do with lucidity.” Of course he’s right but we do live in a world where success, however we define it (and this is important because it is not a fixed set thing) has currency. Success is only one measure but it is a measure. It usually brings a wider readership, it might bring money, reputation and status, greater networks. These are wonderful things that might make writing the next book easier but none of which have a causal effect on the thing that is most important – writing well.
What was the initial starting point/spark for your new novel, The Woman Next Door?
Being around my grandmother around the time my grandfather died and thinking – what must it be like to be burying your husband whom you’ve been married to for almost 70 years, what must it be like to have the bulk of your life behind you.
What themes interest you most in your writing?
Family. Motherhood. I’m interested in our flaws and our capacity for compassion. Relationship and love interests me a lot, romantic love, romantic entanglement, marriage. I like looking at what I think of as myths. I’m very pulled in by character and so I enjoy getting into the psychology of characters and why we are the way we are. More and more I’m fascinated by history.
You, like me, live in a society which is not quite your own. Do you think that gives you special insight into the society in which you are an outsider?
The outsider always has some kind of vantage point. Even just geographically we can understand that. Of course the outsider is both wise and ignorant. Same way the insiders have their wisdoms and their ignorances. I think, almost paradoxically, that no community is complete without its outsiders and the corollary is also true, all outsiders need the community from which they stand apart.
Can you tell me a bit about the novel that you’re working on now?
I’m working on a story about two divorced parents that go in search of their estranged adult daughter whom neither have spoken to in almost a year. It’s the story of a family that didn’t work and an attempt to solve the mystery of why not, an attempt to repair. It’s about art (the daughter is a talented artist) and love. It’s also about death.