Boxing Day with the Giraffe Family 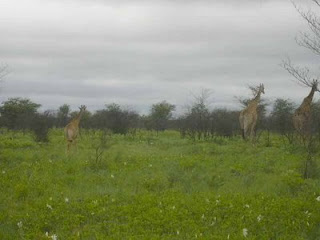 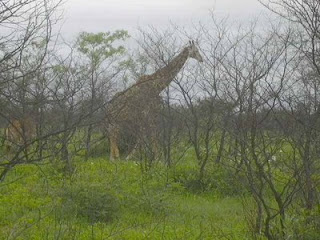 This year we stayed home for Christmas. Christmas Eve we had a small party, Christmas Day we laid around eating party leftovers and watching an endless chain of pretty bad Christmas movies on eTV. It appears, much like music, if you drape a movie with a red and green cape and put in a few Christmas carols someone will snatch it up. I did like the Muppets Christmas movie, but that was saved by Whoopi Goldberg as a quite irreverent God.

Boxing Day we were off to the nearby Khama Rhino Sanctuary for some game viewing and a picnic. We’re lucky to have a fairly big game park less than an hour’s drive away, since most parks and reserves are located in the north around Maun and Chobe, it is really a treat. What’s lovely about the Sanctuary is that it was a community initiative. It is run by a trust made up of members of the local community. Quite a success story.

Unfortunately, we saw no rhinos yesterday. They have quite a few white rhino (the breeding programme has been very successful) and now two black rhinos. We normally see the white ones, but have never seen any black. Both types of rhino are endangered in Botswana, the black rhino even more so.

Although rhino are lovely in their own way, they are not my favourite, though I do like the babies. My favourite are the giraffes and warthogs. We saw this group of three, which in our anthropomorphic way we decided were a mother and father and their baby. We also saw plenty of warthogs. The biggest group had five babies and two adults. Warthogs are funny as they often come charging at the car and stop some distance away, take a good look at you, then turn with their tail held characteristically high and trot off. I read that they have poor eyesight, so perhaps they are just trying to get a better look.

We also saw ostriches having sex. Animal sex is often a handy segue for parents of teens, of which we are; a place to drop in a few bits of sex education without formalising it all with “THE TALK”. The male ostrich did his business and then got up and walked away as if he didn’t know the female. Our female giant teenager said, “Well that wasn’t very nice.” Seeing an opportunity, I said, “Typical one night stand.” Hope she got the message.
Posted by Lauri at 10:16 AM

This is just such a wonderful post. Ostrich one night stands, eh? LOL. Just priceless!!

It really is a blessing having the game park so near. We often pop over for the night to camp or sleep in one of their chalets. Suddenly you're in a different place. It's very nice.