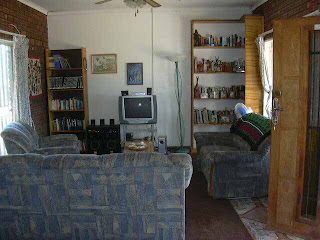 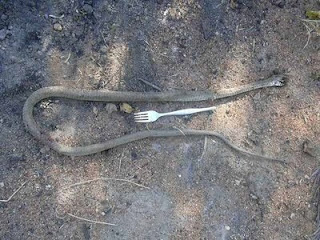 As you might know, for the last six years we have lived in a village in the Tswapong Hills called Lecheng. Lecheng is quite rural and, since it is near the hills, is notorious for snakes. We had plenty of snakes in our garden as my artwork clearly showed.

Now we’ve moved back home to Mahalapye. Mahalapye is a big village, one of the largest in the country, located on the main A1 highway about half way between Gaborone and Francistown. It is well developed with modern facilities. Our house is near the edge of the village, but nowhere near being in the bush and we are surrounded by plenty of other compounds.
The reason I’m telling you this is because one would expect snakes in Lecheng, I got used to them, at least as used as a person can get, but I wouldn’t expect a snake in Mahalpye- especially in my sitting room.

This afternoon, I was happily eating my lunch sitting in the chair to the left. (refer to photo) I got up and went to the kitchen passing the door to the right a few times; to answer the phone, get coffee, and wash dishes. I was sitting down to drink my coffee and watch Judge Hatchett and I kept hearing a hissing type sound. I thought it was the ceiling fan so ignored it. I looked up again and there behind the door to the right was a two metre long cobra. It obviously thought my trips to and from the kitchen were some sort of human pre-fight ritual as it was up, hissing and ready to fight. I, on the other hand, had turned to jelly. I was surprised at my reaction. I know I am not a fan of snakes, but I was shaking and panting and scared out of my mind. I grabbed my cell phone and ran to the bedroom.
Meanwhile, Buster the African Sausage Dog and Chelsea got to work. I heard them barking and fighting from my bedroom where I was busy calling my writing partner 200 km away, the police and my husband. I pushed a towel under the door and waited. By the time the troops arrived, Buster and Chelsea had the snake outside and were guarding the very dead reptile in case it tried to resurrect. They are thorough heroes on top of everything else.
Posted by Lauri at 4:47 PM

I would have been beside myself. A cobra, you say? A real, live cobra? I think I would've passed out. Thank goodness for Buster and Chelsea. They need an award of some sort!!

Wow! I'm okay with snakes, but not in the house. That all sounds too close for comfort. Glad you're okay.

The worst part was that because our house was empty for so long we had to put security doors on all exits. I usually leave them unlocked as I'm paranoid about being trapped inside but I had gone into the village and locked everything and then forgot to open. The snake was at the only exit from the house that was unlocked and the keys for all of the other doors were next to the snake too. So I was tapped.

It was such a base visceral fear when I saw it in the house (far worse as you've pointed out daoine). I was really surprised by my reaction, especially since I've seen loads of snakes outside.

Yesterday the dogs had blood on them and I search around but didn't see any bites though in my bedroom I heard them cry out a few times. Now I see a bite on Buster. The police said some dogs are immune to bites (they also said cobra bones are poisonous, so I'm not sure I have a lot of faith in their knowledge of snakes). They also said sometimes snakes bite without injecting poison. In any case, the dogs are fine.

Glad he/she didn't decide to get feisty while you were walking to and fro!

Yes, Groovy I play THAT scenerio over and over in my head. OUCH!

Snakes don't bother me, but then the ones we have around here are non-poisonous and pretty small. However, I would have reacted the same way had I found a cobra in my house.

Karen I didn't know my blog produced such fun verication words, I thought that domain was controlled by Ms Karen.