Shakespeare and the Cat 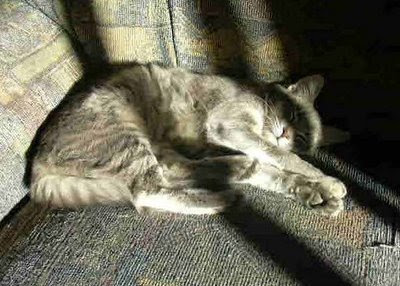 Cats seem to have been born for pleasure. They will find the softest blanket, the warmest patch of sun. They will turn their nose up at any food not up to their standards, they'd rather go hungry than not thoroughly enjoy eating. Everything put on earth has been placed here for their entertainment- lizards, birds, a leaf blown by the wind. They are hedonists of the first order.
This picture is Sergeant Catman sleeping on the sofa in my bedroom, the one that entices me most days with its late afternoon sun; but I, the good writer with a heavy sack of Protestant work ethic, go back to the computer, and Sgt. Catman takes my place, or his place which I'm sure is the way that he sees it.
As readers will know we have a problem regarding Sgt. Catman. He came to our home as a boy and the vets turned him into a girl, or rather recognised that he had been one all along and made us aware of the fact. Still I see him as a boy and call him Sgt. Catman as I've become used to that. I can't quite accept the truth just yet.
The other night my daughter, one of the Giant Teenagers who are currently home for a week long holiday, said that I must stop it, that I'm committing some sort of animal abuse. I considered her point and thought I might come with an alternative name, one that might grow on me to pull me to the realisation that my cat is a girl. Viola popped into my head.
My daughter laughed. I asked her why and she reminded me of 12th Night and the cross dressing Viola. I'd forgotten about it, at least consciously, but immediately realised the appropriateness.
So now my cat has a new name- Sgt. Viola Catman.
Posted by Lauri at 12:18 PM

I like the new name. Does Sgt. Viola Catman respond to her new name? Or is she a typical cat and ignore silly humans?

Incidentally, I keep forgetting to tell you I like your new avatar picture.

No Viola responds to no names so I wonder really why I'm troubling myself at all.

Glad you like the pic- I took it when I got my new haircut. For the time being, I'm sticking to short hair, I found a guy in my village who cuts my hair with those buzzing clippers. He does quite a nice job and charges me 10% of what the hot-shot hair salons in Gaborone charge and does a much better job.

Sgt. Viola Catman is quite a mouthful. My mom had a friend named Viola that went by Vi. I think I'd have to call the kitty Vi. But that's just me.

I wish I could cut all my hair off, but I have a smallish head and I don't look all that great with short hair. Lucky you, cause you do.

The full name of Thing's cat is: Admiral Archduke Rosenkrantz, a.k.a. Lord Fancypants, a.k.a. Archie McSilly Pants, a.k.a. Where's That Damn Cat?

Oh, and he doesn't answer to anything but Fat Bebe (even though most of us just call him Archie).

I forgot to mention, I love the name you've given your cat, but I'd still probably call her Sarge. My friend was a Sergent and she loved the title, now we just call her Sir because she's a Colonel.

Karen I do call her Sarge- usually Sargie.

On the theme of word verification woords mine is -bioness- I think that might actually be a word- is it? It should be. The noun for the living.

St. Viola Catman! I love it... cats are wonderful creatures. I'm sure she appreciates the acknowledgement of her true gender! :)

Sgt Viola Catman is probably sitting back right now in a nice warm spot musing on the quirks of human nature.
'Don't they know we recognise each other by our miaows?' she says.

I've never had a cat that responded to a name, but I did have one who came running when you played show tunes on piano!

So I'm reading this and thinking, "Hey, I've already read this and commented on it, but my comment isn't here!" Then, after another cup of coffee I realized I saw it on FB.

Sorry Groovy. I just recently learned that posting something on Twitter and Facebook both is bad etiquette and I wondered if having my blog linked to my Facebook is also considered bad. But to be honest, I don't know how I did it in the first place and wouldn't have a clue how to undo it.