When will Writers be Part of the Culture of Botswana? 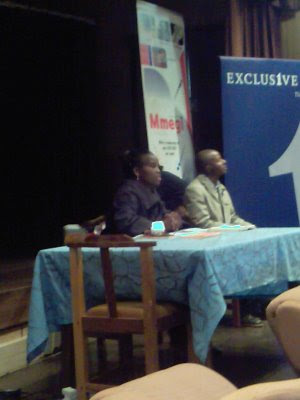 On Sunday the Bessie Head Heritage Trust held the ceremony for this year’s Bessie Head Literature Awards for novel, short story and poem. Pentagon Publishers has been the sole sponsor of the awards for the past two, but this year it was good to see Exclusive Books donated bundles of books for all winners. Other contributors included Botswana Advertiser, Mmegi, Momentum Wines, The Ngami Times, Simple Marketing, Sunday Standard and The Voice.
Given the way the Ministry of Youth and Culture and its Minister Gladys Korkorwe likes to latch onto the Bessie Head Awards as something they are part of, it is shocking not to see their name on the list. Meanwhile this same President’s Day weekend that ministry is popping out cheques as if we are not in the midst of an economic meltdown for every imaginable category of arts and crafts and traditional dance with winners taking home P10,000 cheques for first place as well as lesser amounts for second and third place while the Bessie Head winners won P2500, P1500 and P1000 (novel, short story and poetry, first place winners respectively- 2nd and 3rd got books only) money donated by Pentagon Publishers NOT the taxpayer. One wonders- when will writers be considered part of Botswana Culture? Even when Minister Korkorwe was right in Serowe, Bessie Head’s home, for Culture Day a few years ago, when she listed people from the village who had added to Botswana’s culture, she failed to mention Bessie Head, one of Africa’s best known writers.

Unity Dow was the “honoured guest” at the ceremony this year as she corrected the MC, poet, Goodie Tlhokwe. She said she was not the guest of honour, but rather honoured to be asked to be the guest. Before awarding prizes she read from a story in Bessie Head’s Collector of Treasures. Ms Dow chose Head’s fictionalized version of the history of the Serowe branch of the Batalaote tribe. 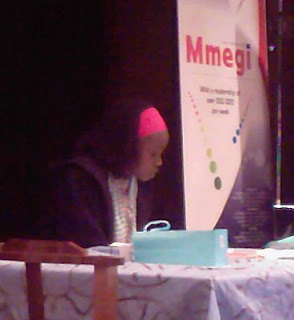 After her reading, the prizes were awarded. Personally, I was very happy to see Gothataone Moeng scoop first prize for her short story “Putting on Faces”. Please note down somewhere what I’m about to say – this young woman is a writer we should look out for. So later, when my prophecy comes true, remember you heard it here first. She read a short excerpt of the story which deals with the attitudes of Batswana toward Zimbabweans working in the country, a theme she has touched on before in her story Who Knows What Season Tomorrow Brings in Long Time Coming published by ‘ama Books.

I was also intrigued by Cheryl Selase Ntumy’s Crossing which won in the novel category. I’m looking forward to reading the book to be published by Pentagon Publishers.

In the poetry category, I loved third place winner, Masego Morima’s "The Man Who Walks", about the rich and so called powerful and the way that they undermine a man who walks the streets of Gaborone from the high windows of their expensive cars. It seemed to channel a warning that they might be doing so at their own risk. It was lovely and simply written with a knock-down powerful message. I was surprised it hadn’t been first place, but Dow warned the crowd, judging is subjective.

There was open mike for the audience to read something if they wanted. Although I despise reading in public, I’ve promised myself I must take every opportunity that presents itself to read until I am no longer uncomfortable with doing so. I read my story A Pot Full of Tears; I was still nervous, but I’ve learned to slow down a bit so there was some improvement.

Friend to Bessie Head, Tom Holzinger put together a lovely slide show about her life that ended the entertaining ceremony.
Posted by Lauri at 6:34 PM

Oh, I have the same problem while reading aloud, nerves act like some sort of fast moving turntable from the old days, I h-a-v-e l-e-a-r-n-e-d t-o s-l-o-w w-a-y d-o-w-n. Sounds like a lovely event.

Oh, and by the way, I love the title A Pot Full of Tears. How does an American buy your work? I am a big fan of short stories.

Moeng sounds fascinating, and I love the topic of her short story. Sounds like it was a great event.

Elizabeth- I have no collection of published short stories (except for children) but I do have quite a few on the internet.Here are a some:
http://www.african-writing.com/kubuitsile.htm

Maxine-Yes, the xenophobia against Zimbabweans in Botswana is very sad.

Lauri, this question resonates unfortunately everywhere within Africa. It is the same thing in Nigeria and it is quite sad. Yes, we have had some notable figures like Achebe, Soyinka et al, but the reality is that current government refuses to see the relevance of writers to culture.

Loved what Unity Dow said. Very humble and sophisticated all at once.

Jude I was thinking the other day, writers should put on leather skins and rattles on their legs and perhaps then we might get some recognition as builders of culture. Or am I going cynical?

Lol, Lauri! We should try that... with some cowrie shells to boot!