To start a very busy week I thought we might do with a kitten update. They are now four weeks old and walking awkwardly. I see now the grey and white one has a patch of brown so I guess there are at least two females in the bunch. I'm trying not to give them names so I don't get too attached, but the smallest one, the calico, I call Christopher Columbus because she is always out exploring. The orange and white one, the one I think I'll keep if I don't keep them all (!!) is called Casper after the friendly ghost because he's so white. When they are up and about walking is a problem as they seem to be everywhere. I've shown them food but they don't understand the concept yet. Catman is finally understanding her role in this production but it will , sadly, soon be over.

And for more cat fun- how about those ambitious cats who go on for further education? Read about them here. I can only hope the kittens will take their education so seriously. 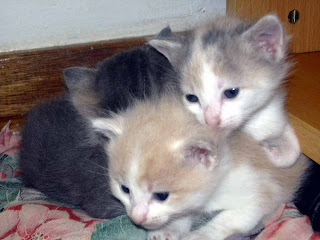 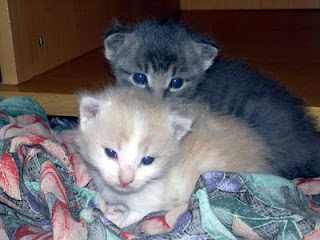 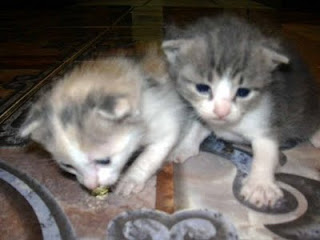 Kittens!!! I'd be keeping them all. It's just the way it is.

I'd end up keeping all those kittens, I just know I would. I have four dogs. Too many, they are a wild pack, the hounds of the Baskervilles.

wow! they are very lovelies!
'kiccica' = one kitten by Hungarian pronunciation :)

Gotta say, I am one of those people that don't care for cats, but the names you chose are fantastic and even I have to admit the little tikes are cute!

Ahhh. There is nothing sweeter or more adorable than a kitten. Nothing!

Look at the little cuties!! I'd have to keep them all. I am hopeless like that. So soft and fluffy!

Selma they're actually not that photogenic or I'm a crap photographer becasue they are much cuter in real life.