The Books Have Arrived!! 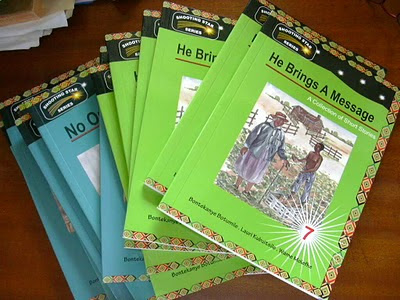 On Friday, I received my author copies of two short story collections I wrote with two other Batswana writers, Wame Molefhe and Bontekanye Botumile. I'm so pleased with the books I can't stop looking at them. They look so jolly and inviting. I'm so proud my name is on the cover. (the third one will be coming out next year)
In 2008, we three women writers set out to write short story collections for upper primary school. We agreed we would do three; for standards 5,6, and 7. We had a fanatically short amount of time, I think it was about three months. I was lucky as I had quite a few stories already written. We started writing and submitting stories to each other. We critiqued and edited and finally decided which stories we could use and in which books they would go. It was a stressful process for all of us. We submitted the books to Pentagon Publishers and they were then submitted to the Ministry of Education. To our surprise and delight -all three were selected as prescribed books.
What I love most about these books is that each of us are very different writers so there is quite a wide selection of stories for children to choose from. Bonty has made her mark re-telling traditional tales and in these books she writes many of her stories about mythical snakes that live in Setswana folklore such as the scary Kgogela,the Hypnotist. Wame writes of modern problems kids face and how they find their ways through. Her story Another Mother, for example, is about the problematic situation of a young girl's father marrying again after the girl's mother dies. I often am inclined toward the silly, as in my story about the magical TV that allows you to reach in and get what you see on the screen ( The Problem With That TV), or the occasional social message as in my story My Friend, Jackson about the friendship between a Mongwato boy and a Mosarwa boy.
We often hear in Botswana, that Batswana are not readers. I love thinking that maybe somehow, somewhere a story in one of these books will ignite the love of reading in a few young hearts. How lovely that would be.
Posted by Lauri at 8:00 AM

Fabulous, Laurie! These look terrific and clearly this is piece of work you really should be proud of...not only great writing (I'm sure) but a chance to change a child's life by giving him something wonderful to read. Well done!!

How great is that. There's somethingincredibly satisfying about reaching out to kids. Congrats to all three of you.

Great! Books with your name on cover or spine are always a real treat. Covers look inviting nd promise interesting stories inside. YA market is so important. It's just about the last chance to lure a child into reading for life. Time to get a glass-doored bookcase.

Is Kgogela, the Hypnotist, like the Native American Trickster?

What a happy day! I can feel you beaming from the other side of the world. Take a moment and rejoice in your accomplishment.

Congratulations! This sounds like a wonderful mix of stories and it's great that they will be read by so many. I would be dancing around the room.

Thanks guys for you kind words.

Bonita I don't know if they're the same. Kgogela stares in peoples' eyes and hypnotises them. I have a friend in America who teaches English at a university there and has done a lot of research on Louise Erdrich who writes about Native Americans.When me friend was visiting me here she was very surprised to find so many similarities between Setswana traditions and some of the traditions of Native Americans.

Lauri,
this book sounds so great, totally wonderful. There's nothing more worthy than encouraging children to read - and inspiring them with a love for short stories! Well done to all three of you.

What great work. Truly something to be thrilled about. I don't know if you ever read the book, "A Tree Grows In Brooklyn"? I read it a very long time ago (14 or 15) I was putting all my books away, (unpacking), I decided to read it again. The protagonist is a child, and she loves that she can go to the library and check out books (even though she is dirt poor), and I am so loving this book all over again, albeit from a different perspective. I was one of those kids that loved to read, & escaped from an unhappy home life through books. Reading is a gift and you have a part in bringing that gift to children. You should be proud!

I am really pleased for you, Lauri. They do look jolly and inviting. I am sure you will instil a love of reading in many children. Good on you!

Thanks Tania and Selma!

I love your blog and congrats on all your publications. I am a memoirist and poet and I was in Botswanna a year ago. What an amazing place!

I wondered if you could suggest a publisher for a collection of poems from my 3-week African journey. What an amazing place you live in