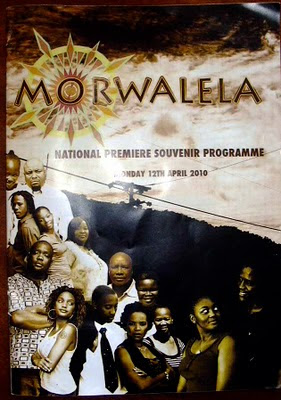 Last night, 12 April, was the premiere of the first television series I had the opportunity to be a part of, Morwalela. I wrote it with another Motswana writer, Wame Molefhe. We put in a bid for the job and got it even though we were up against people with much more script writing experience than us- which was not that difficult since at the time our combined television writing experience equalled zero. The drama series was developed by an HIV/AIDS NGO in Botswana called PSI.
Although getting a book published is a process of compromise, television writing is a soup made with many cooks and in this case more so than in others. We wrote the scripts quite some time ago. We wrote 13 -thirty minute episodes, the final product is only eight episodes. The director is billed as the writer, I guess since he had to adapt our 13 episodes to fit into eight. I don't know, I'm only guessing as no one spoke to us about this.
Last night there was a live viewing at the BTV auditorium in Gaborone for people involved in the production. It was nice to watch the first episode with a roomful of people who worked to produce the series. I liked to see characters Wame and I created in our minds up on the screen in flesh and blood. Because we were not involved in the adaptation of our scripts, I think some of our initial motivation and thoughts were lost along the way and that was a bit sad, but I think this is the nature of the television game. It is a collaborative process and one can't be precious with their words. I thought the final product looked pretty great.
The programme is part of the national response to HIV/AIDS in Botswana. The hope is that the characters will help with behavior change in the country. It will be showed on BTV every Monday from 6:30-7:00 pm. If you get a chance to watch it, let me know what you think about it!
P.S. Curious about the title Morwalela? Morwalela means flood in Setswana. We were trying to think of a name for a fictional village and I remember being in our sitting room with my daughter and husband and us brainstorming ideas. We got a few, of which Morwalela was one of them. I took them to Wame- and the village and television series Morwalela was born.
Posted by Lauri at 5:04 PM

Congratulations! How cool is that! Bummer that your name isn't in the credits, but you still get to list it on your resume. I think it's totally exciting. Maybe next time, you'll be officially listed and can watch your name scroll by on the credits. In the meantime, it's got to be interesting to know what you wrote and watch to see what survived and what was cut or rearranged.

That seems a bit underhand to me i.e. the fact that you guys never got credited. At the very least they should have credited you in the end credits as co-writers (especially since I assume that no one told you that you won't be given any credit whatsoever - or were you guys paid to give up all rights to the scripts? If you weren't, this is pure balderdash in my estimation and I think you should make a little fuss, it just might get your name up there).

That's totally brilliant, congratulations! I hope you are credited somehow, that seems a little off. This is so cool, I must get on with finishing the interview with you, the most prolific writer I know!

more confetti and noisemakers!!
Hope you were able to keep rights to the story. I suspect that since the TV series was produced by a NGO, you do have the rights. If so, you might be able to embroider the TV story and resurrect the parts of the script that fell by the wayside. You might mention to the NGO that this could offer great support for venues which have limited access to AV equipment. The NGO could even charge a modest fee for it, making it a fund-raising tool. And, there are teacher support materials to be written. Help for classroom teachers to expand on the points in the TV serial. Q /A to test students comprehension... and all that jazz. Over here a number of the science programs offer coordinating teacher guides to help teachers make a complete lesson plan for the programs.

again, best to you whoopppeeee

No- maybe I didn't explain properly we are in the credits as the scriptwriters and we have got a lot of press on this. The director is up first as director and writer then later we're included as scriptwriters.

No Bonita, the NGO keeps the copyright, which is actually fine with me.

There is no holding you back, Lauri. I am really pleased for you. Next stop Hollywood!!!

It looks awesome! You are such a go-getter.

I wish I could watch this Lauri! Is there any chance they may show snippets online at any stage or release it internationally? Congratulations.