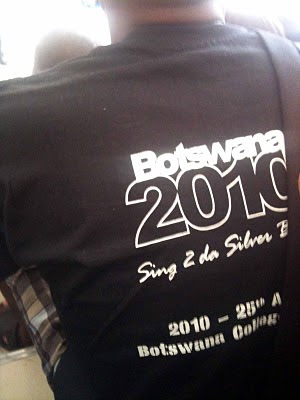 I've been gone for a week to Botswana Music Camp. I play trumpet, not so well, but each year I attend the camp I jump three or four steps ahead and this year was no different. The camp lasts for a week. You sign up for a major group; mine was instrumental band. For that group only you must be able to play your instrument before you come because once you are there it's all about getting the people who have shown up to learn songs as quickly as possible and to play together. There is no time to teach the instruments. For other groups you learn the instrument at the camp. Normally for band we have a lot of guitar players and keyboard players but nothing of anything else. This year I was lucky to be with quite a good saxophone player, a music teacher at Ledumang Senior Secondary School in Gaborone. Our leader for the band is Tshilo Baitsile, a very accomplished saxophone player. He appeared in the Mma Ramotswe movie playing his sax. He's an excellent teacher. 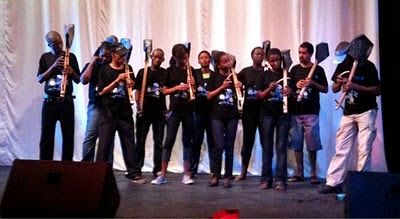 The sekgaba group performing at the Saturday final concert at Maitisong

There are many other groups for campers to choose from including: marimba, setinkane, sekgaba, African drums, pop singing, classical singing and dance. 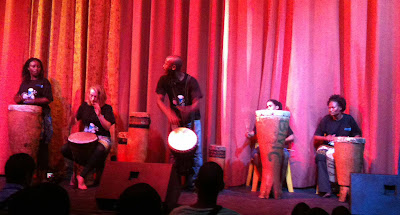 From the minute the camp starts on Sunday you are immersed in music. Each day starts with camp choir which everyone must be in. Then you have your main class for most of the day except for about an hour when you go to one of the other classes for appreciation, to learn what they do there. Each night we had entertainment, always something musical. One night we had a fantastic traditional dance group from Old Naledi in Gaborone. Friday night we attended the President's Concert at Maitisong which was also pretty fabulous. On Saturday we had our end of camp concert. 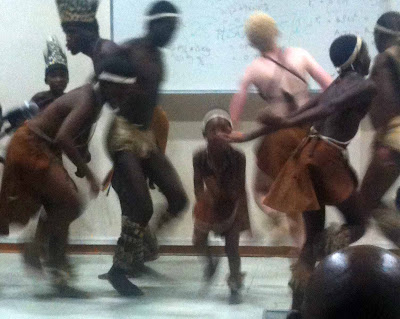 The Old Naledi traditional dance group that came for evening entertainment
It really is a fantastic thing. This year was the 25th anniversary of the camp. It was started by Batswana and exiled South Africans including Hugh Masekela in 1985. We pay only P900 per person and that includes accommodation and food (both basic but we're not there for that in any case). The real cost for each participant is just over P2000 but the fee is subsidised by donors like Standard Chartered Bank.

Many accomplished musicians in Botswana got their start at Botswana Music Camp since currently we do not have a school of music in the country.

This year, there was a big group of campers from Walter Sizulu University in South Africa. There was a talented young guitarist from Germany and a beautiful young singer from Finland- all participants in the camp. I thought when I was there what a fantastic thing Music Camp would be for a visiting tourist. They would have to pay the full price P2000 ( about 350 US dollars) for a whole week of instruction, accommodation and food. They could learn about the beautiful traditional instruments we have such as setinkane and sekgaba and go home with something so much bigger than photos of giraffes and lions.

I always leave Music Camp a better player but also a better person, with a new list of friends. It really is a wonderful experience. Now I must wait another year to go back.
Posted by Lauri at 4:45 PM

I should sign up for a drum group. My drumming really sucks, but it's fun though >:)

Cold as Heaven- The African drums teacher is fabulous. His name is Neo he's from South Africa. He's also an excellent trumpet player so helped me quite a bit.

It sounds fabulous. I can't carry a note or play any instrument, but this reminds me of the month I spent at the Vermont Studio Center, where I wrote and wrote and made friends. I sense the same kind of excitement in your story as I felt over that month.

It is brilliant that you go to music camp and play the trumpet. There are so many interesting facets to you, Lauri. I can imagine the whole thing must be a lot of fun and also a way to improve your skills. One day you need to post a video of you playing. Hint hint...