Our Trip to the Rhino Sanctuary 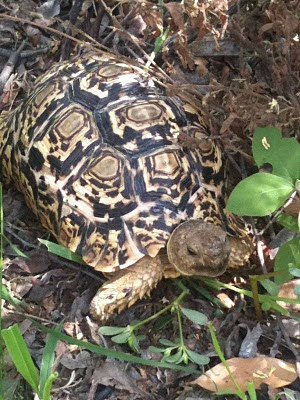 During the Christmas holidays, Mr K and I took a camping trip to the Khama Rhino Sanctuary not so far from where we live. I'm not the best photographer because I much prefer to experience what I'm doing as opposed to taking photos of what I'm doing, so I missed all of the best photos, like the Bateleur eagle and the kudus fighting and the family of eight warthogs. But I did get a few photos I thought I'd share.

This fellow above is a leopard tortoise. Mr K and I had a schedule we followed each day. We'd wake up early and pack tea and peanut butter sandwiches, then we'd head to the bird hide for breakfast. After that we'd spend the morning cruising around the park. About noon we'd be back at the camp site for a late brunch and reading in the shade. While reading, I heard crunching in the bush near our tent. I only saw the grass moving and this fellow's shell and at first I thought it was a massive python. Closer inspection revealed this very friendly fellow who in the end spent the entire afternoon munching away while we napped and read next to him. I'm a huge fan of turtles and tortoises and this one was a lovely specimen. 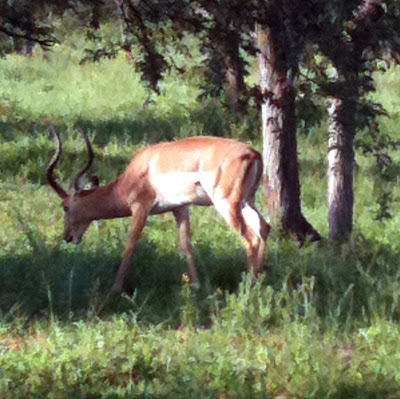 There are plenty of impala in the sanctuary. This is a lonely male. The park is looking very green in this photo. 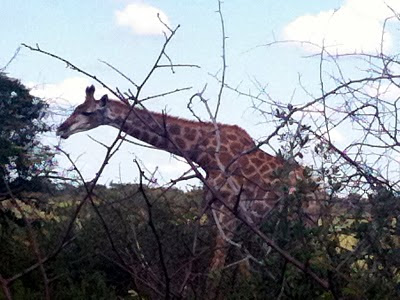 We also saw lots of giraffe. Though I tried my best, I have no photo of them grazing. I suppose they are trying to keep it a closely guarded secret but the giraffe at KRST graze! They spread out their legs and get to work on the grass, all of them even the juveniles. 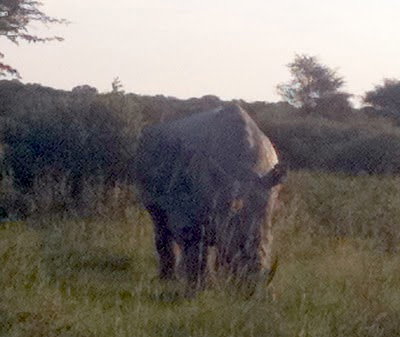 One thing I did notice this time, the white rhino are becoming very tolerant of people. It used to be you'd only see them far across the pan. This one was right next to the car. What you don't see in this photo is me completely spazzing out. I'm not a fan of dying like a shish kebab on the horn of one of these fellows. The problem was we were in a queue of cars, one in front, one behind and this guy decided to come right up to our car and we could not get out of his way. Eish!!

We've been going to KRST for years, sometimes more often, sometimes less. It's large enough to still feel wild but small enough that you always see something. It was a lovely trip this time as usual.
Posted by Lauri at 8:00 AM

Awwww. I'm so jealous. I remember going a few years back, and it was MAGICAL :-)

I LOVE your leopard tortoise - a brilliant shot. I always go to game parks with the intention of not taking photos because it distances you from the experience, but after half an hour of Beric's incessant clicks with his fancy photo kit I succumb!! Ag, I'm just so jealous of you living so near the bush. Lucky you!!
Judy (South Africa)

How fantastic. I would have been beside myself to see all those animals. That you can just go and see them is amazing. Your photos are brilliant!