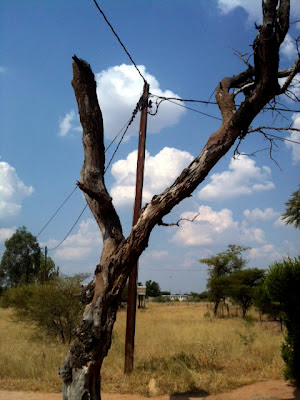 This tree is just in front of our garden. It is forever under threat. People want to cut it down for firewood. Now, if you look carefully at the photo, you'll see the termites are making some headway. But I fight this tree's destruction because it has been a nesting site for birds ever since we built our house.

First it was always lilac breasted rollers. They'd set up house each summer and raise a family. Then about five years ago there was a massive battle, it lasted for weeks, between a pair of starlings and the rollers. The starlings won, but not for long. This year a pair of Indian myna birds have arrived and the battle ended before it even began. The starlings were out and the mynas were in.

According to my bird book mynas don't live in Mahalapye. Well these two do. There is apparently a huge problem with Indian mynas, especially in Australia, as they are an introduced species and are very aggressive. I found this site that talks about the eradication programme the town has to get rid of the Indian mynas. I found it all quite disturbing. I know all about the threat of introduced species and perhaps this pair are the pioneers for colonising Mahalapye but I've grown to love them.

They have had a problematic breeding season because a cuckoo has been around for most of the summer, the cuckoo wanting to lay eggs in the mynas nest. They are nest parasites. The mynas want none of that. They've had epic battles.

They're funny birds mynas. They like to walk on the ground and have a swagger that many would envy. They are taking no prisoners. The bird bath is outside my office window, and while writing this, one of the mynas was at the water drinking. A cape dove flew in ready to land on the edge of the bird bath and the myna flew out and grabbed the chest of the dove pulling out a few feathers- mid-air- and as if nothing had happened, it went right back to drinking water. It's aggressive, of course, and probably the very reason the Australians have such a problem, but there is something about that audacity you need to respect.

I know all about maintaining species diversity and the harm introduced species can cause, but too isn't evolution about the survival of the fittest? I've always wondered why people say scornfully- "House sparrows have adapted to every place on earth" or "cockroaches will survive a nuclear war". Why are these adaptable, evolutionarily successful species so hated? Shouldn't we be championing them for their success?
Posted by Lauri at 3:56 PM

Let's hear it for successful adaptation! I hadn't thought of it like that. And I love the idea of you sitting in your office, looking out your window and seeing Minh birds. I'm in Boston at the moment and all I'm seeing out the window is rain and snow.

That tree and the birds that flock to it give you a lot of joy. I love trees and birds. I have one on my patio deck. Well, actually two trees but one I can see all day without walking outside. I love to see the little birds come and perch there.

I agree with you Lauri, I am really against all the vitriol that surrounds introduced species. We were all introduced somewhere at one stage and the fact is some of the 'introduced' species - particularly in Australia - have been here for 200 years or more. Surely that makes them close to being non-introduced?

I really like the mynas. We have a lot of them in our neighbourhood and they are real characters. They also have the cutest little songs and their little wings make a trill as they fly off. I wish people weren't so quick to condemn them.

I AGREE THAT ITS SURVIVAL OF THE FITTEST, BUT, THERES ALWAYS A BUT, DO WE WATCH OUR NATIVE BIRD POPULATION FIGHT FOR THEIR TERRITORY,OUR DO WE HELP THEM? LOOK AT OUR NATIVE BIRDS,THEY R JUST A HANDFULL AND THE MYNA HAS TAKEN OVER SO MANY SPECIES IN MANY PARTS OF AUSTRAILIA,SOUTH AFRICA,AND STARTING IN BOTSWANA, WELL IM NO BIRD EXPERT ,JUST LOVE THE OUTDOORS AND ALL THAT GOES WITH IT,WUDNT WANT TO SHOW MY KIDS WAT USED TO BE THROUGH PICTURES, WELL JUST MY VIEW,DOESNT MEAN IM RIGHT,