President Zuma and the Dogs 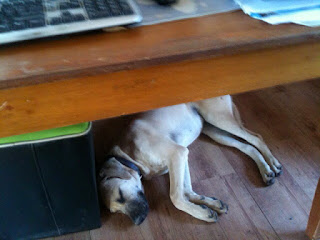 So the South African president, President Zuma, decided to declare dogs and the caring for dogs a "white, non-African" practice. You can read more about it here. I'm not sure where he got his facts, but scientists are beginning to accept that the first domestic dogs actually came from Africa.He is actually perpetuating racist stereotypes in a country that can ill afford such behaviour.

Of course Zuma's utterances have made people angry. It has re-ignited the racist fire that is never completely out in South Africa. It's too bad because Zuma has many important issues to attend to and now he's taken the debate to a place that is not constructive.

I have three dogs, the youngest my puppy Delilah shown above having a snooze under my desk in the office. I love my dogs. But perhaps Zuma was trying to make a point albeit in a clumsy way. Some people go overboard when it comes to animals, at the expense of people. For example, I believe a dog that attacks a person needs to be put down. An uncontrollable dog is dangerous. I feel the same about wild animals that kill people. But some will say an elephant that has killed a person should be saved. People must have a sensible view when it comes to animals.

Having said that, I've always felt, in fact, that we have more of an obligation to domestic animals than wild animals. We took these animals from the wild and made them dependent on us. It is unfair now to abandon them. To mistreat them. Thousands of years ago we made a pact with them. It is wrong to go back on it. I just hope President Zuma's words will not allow people to renege on that agreement, thinking that somehow it is African to mistreat a dog. It is not, as so many Africans have been saying on the social networks after Zuma's speech. Being loving and humane is part of African culture. And so is keeping a promise and standing by your word.
Posted by Lauri at 5:16 PM

He seems no different from any other leader who sadly misses the point. President Obama, while the country is heading toward a "fiscal cliff" took his family to Hawaii for a vacation instead of staying here and resolving the problems. I myself are drawn to animal lovers because they tend to be kind people. Morgan Freeman once said when asked what we can do about the "race problem" is.
"Stop talking about it."
I agree with him, we need to stop talking about the differences and find common ground to unite us as a human race.
Thanks for posting this.
Ann

Happy New Year to you and your household.

FYI - I have a review scheduled tomorrow for your book on my blog.
Ann

I do think we have a responsibility to the animals we have domesticated. I don't know much about Pres. Zuma but his attitue does seem a bit backward. Yes, people are more important but I think caring for nature translates to caring for people and therefore increases our sense of empathy for other living things.

There is a frame of reference. What media says would focus on one aspect. He (Zuma) seems to have addressed traditional and rural people from KZN. With their experience in mind, he referred to instances where people sit with dogs in the front of their truck and a worker at the back in pouring rain. (refer to statement by Mac Maharaj "President's remarks on promoting Ubuntu") These people do not realise their dignity and accept or assume that the dog is more important as it belongs to the boss! (The statement should include other things as well e.g. the house / car of the boss is more important than the labourer) Zuma tried to illustrate to the people that they have human dignity and should be respected, using the example of a dog, as dogs in the African culture are seen differently than in the white culture (Dogs are not really seen as pets but as workers, scavengers, etc) Unfortunately this sad state of discrimination and marginalisation happens frequently. Petro Schonfeld Nhlapo

Petro, thanks for stopping by. I agree that a skewed view of animals is wrong, especially at the expense of people. But too, if Zuma wanted to talk about ubuntu and the dignity of people, it was clumsily implemented. I have come to the conclusion that to rid ourselves of racism we must recognise our simlarities not inflate our differences.