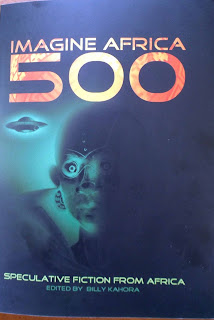 I was so excited to receive my copies of this anthology yesterday because I have my first every published sci-fi story included in its pages! My story is called, When We Had Faith. The anthology is published by Pan African Publishers in Lilongwe Malawi and the project was instigated by Shadreck Chikoti, well known Malawian writer and social activist.  He has a clear vision about the role of fiction, in particular speculative fiction, in discussions about Africa's future. He speaks about this at the front of the book.

"It was this realisation that art can actually contribute to the discourse on Africa's future that birthed the initiative Imagine Africa 500," writes Chikoti .

The stories in the collection started from a workshop held in Malawi facilitated by Billy Kahora, Beatrice Lamwaka, Jackee Batanda and Chikoti. The last assignment for the particpants was to write a story on the subject of what Africa would be like 500 years from now. Those stories were the seed for the anthology. After that, they sent out a call for stories on the same theme from writers across Africa.

"The stories in this anthology show some exciting prospects about Africa's future but some also show us our darkest nightmares and make us aware of roads not taken," says Chikoti.