The Rest of my Cape Town Trip

After leaving the Caine Workshop I still had loads ahead of me. I arrived in Cape Town on the 15th and almost immediately set off for Springfield Convent School to speak about my book Signed, Hopelessly in Love. 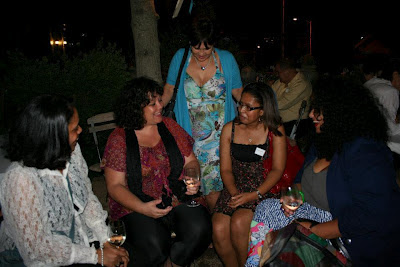 I was lucky to be in Cape Town while the authors' party for NB was taking place. NB is the publishing company under which all of my romances (published by Sapphire Press, an imprint of Kwela Books) and Signed, Hopelessly in Love (Tafelberg) are published. So on the evening of the 15th it was time to party! It was such fun to spend time with all of the Sapphire folks, many I hadn't met before (above photo). 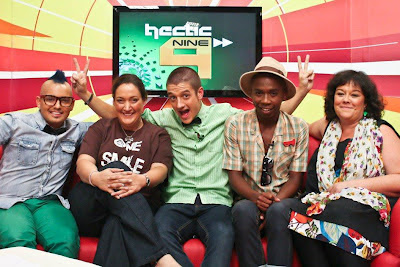 The next day, the 16th was all about being on television for the first time. I appeared on the teen show Hectic Nine 9 to speak about my book. (above I'm with the presenters in the green and brown plaid shirts and the two other guests) When I was at Volmoed, I was interviewed on SAFM and despite what people say, you actually can be at two places at the same time. The radio interview aired very near to the time I was live on TV. HA!! 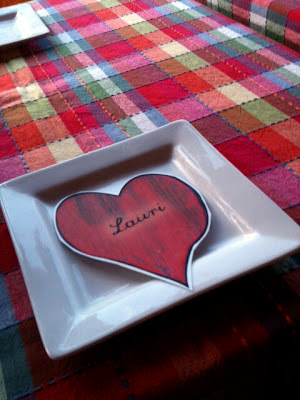 That night Tafelberg organised the most lovely thing!! It was a dinner with 14 girls from various teen magazines in South Africa. They'd all read Signed, Hopelessly in Love and were so keen to discuss it. We had dinner and great conversations. It was really a delight. One of the girls, Taryn, has already blogged about it at Saltwater Girl. It sounds like they had as much fun as I did. I got some good insight for the sequel to the book that I've already started. (above is a photo of our name tags at the dinner) 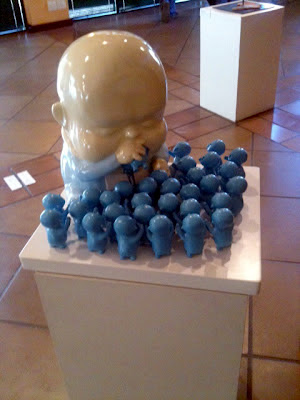 The next day I was off with my friend Lesley Hay-Whitton to the first day of Hangclip Art Week in Betty's Bay. Such a beautiful drive from Cape Town along the coast. Above was my favourite statue called "Yummy". 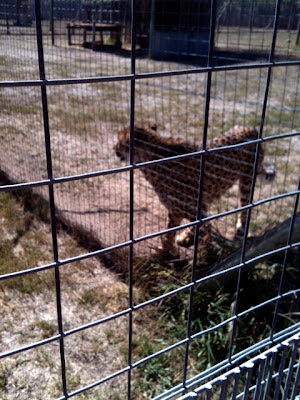 From there I spent a few days with my good friend Colleen Higgs. She's a writer and poet and owner of the acclaimed, independent publisher Modjaji Books. On Sunday I went with her and her daughter to a place called Spier where cheetahs, raptors and owls are rehabilitated. 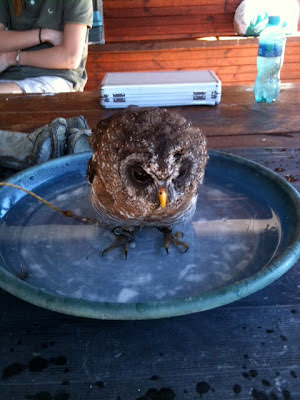 Above is a Cape Eagle Owl having a bath and below is a barn owl. If you get a chance to go to this place you should attend one of the raptor shows, it was wonderful. 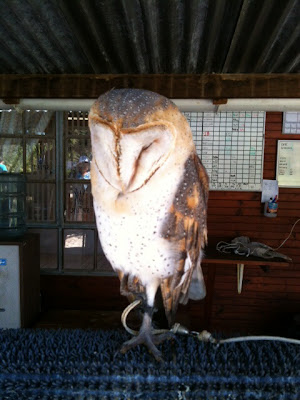 On the evening of the 20th, Colleen was launching her collection of short stories, Looking for Trouble at The Book Lounge in Cape Town. She asked me to interview her at the launch and I was very honoured to be part of it. The book is fantastic. It is a collection of stories all set in Yeoville, a part of Johannesburg, during the turbulent 1980s, all told in an honest fresh way. 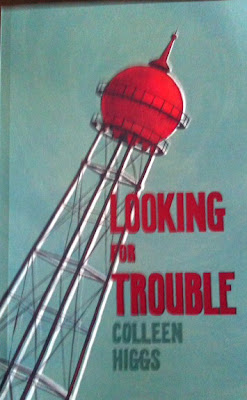 And now I'm back home. It was a fantastic trip! Thanks to everyone who made it all happen!!
Posted by Lauri at 3:08 PM

Sounds fantastic! I think these are the perks of being a writer -- if you can get them. Sounds like a wonderful and inspiring trip!

Well, if anyone can be two places at once it is you, Lauri. LOL. I'm so thrilled for you. I am such a fan of Signed, Hopelessly. It has made my day to learn you are writing a sequel. MADE MY DAY. And it is fantastic you have so many young readers getting into your book. Awesome stuff!

What a wonderful time you had! I have yet to go visit Cape Town though. Interesting photos too.

Sounds like a really busy trip. You must have been exhausted when you got back home to Botswana!

This trip of hers definitely highlights how important it becomes when you come to South Africa through flights to Cape Town. The writer had an amazing tour whether it was because of her books.