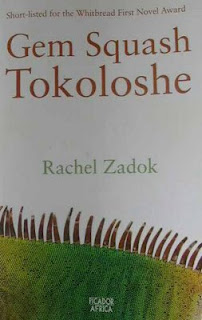 I’d been wanting to read this book for some time after reading quite a few reviews. Either I would be in Gaborone but not have money to buy it, or I’d finally have money and the book couldn’t be found. Finally I got a copy and a chance to read it and how happy I am about that.

The book is about Faith. The first part of the book is about her time on a farm in South Africa during the time that her parents are divorcing. It is laced with fairies, both good and evil, conjured up by her mentally unstable mother. Among the scary monsters that go bump in the night on the farm is the mythical tokoloshe. Tokoloshe are apparently everywhere in Southern Africa, perhaps beyond I don’t know. They are troublesome often violent spirits. In Botswana they tend to partake in sexual misdeeds (if The Voice newspaper is anything to go by), but according to this book, in South Africa they are just bad, even to the extent of killing people.

So Faith grows up haunted by her mother’s fairies as well as her mother. A tragedy at the end of the first part of the book leaves Faith essentially parent-less and she is raised by her mother’s friend. I liked the first part of the book, but as a parent I was becoming increasingly infuriated by Faith’s mother who becomes so helpless and at the same time fills the poor girl’s head with more demons than a young girl should rightly have to carry around.

I think the second part of the book shows Rachel Zadok’s metal as a writer. Faith is an adult now and her mother, who has been in a mental hospital, has died. Her death and a chance meeting with a diviner lead Faith back to the farm and to the truth she’d been unable to face but is the very thing that will let her free.

I like this book save for two criticisms. First, is the characterisation of Nomsa. Nomsa is a young, black woman who comes to the farm to help with the care of Faith while her mother is having a nervous breakdown. We just get the edge of who Nomsa is but we need more to wholly believe the ending. She’s not pulled out quite enough.

My other problem is nothing more than a niggling. Thokoloshe is spelled differently in different places in the novel. It is a word spelled in every Southern African language that uses it in a different way. If as it appears, Zadok is using Southern Sotho then let her stick to that and not change along the way. Perhaps it was just an editor’s error as I only saw the change one.

I loved reading a novel from South Africa without politics, or at least only incidentally. How refreshing!

An excellent book, I highly recommend it.
Posted by Lauri at 10:37 AM