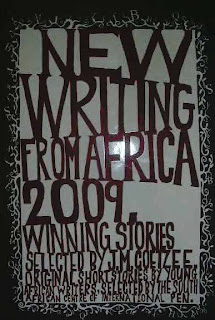 I received my copy of New Writing from Africa 2009, which is the anthology of the stories that made the shortlist for this year’s PEN/Studzinski Literary Award. It is a beautiful book. They’ve done a lovely thing at the beginning of each story with a map of Africa and the writer’s country highlighted and then their picture and biography. The two Botswana writers, myself and Wame Molefhe, are second and third in the book thanks to the alphabetical ranking of our country. I would request Algerian writers to please refrain from entering next year or if you must enter please move to Zambia or Zimbabwe. That would be very helpful.

Bios are tricky, more so when you are asked to comment on your writing. I think my attempt at anti-intellectualism in describing my story worked- unfortunately. It was almost as bad as Mma Molefhe’s painful admission that one of her hobbies is sewing.

The book is beautiful- that is- until page 394 and 395- the final judge, Mr. JM Coetzee’s comments. The prize winners in this competition were all white, South Africans though all judging was done anonymously. This seems to have pushed Mr. Coetzee, sitting in Australia with his heavy satchel of white guilt, to come up with a reason. He does contend that he perhaps does not have an ear for the continent’s writing and for that I give him one point. But then it all goes very wrong. He then says- “…educational standards vary, and along with them levels of competence in the reading and writing of English, not to speak of familiarity with international literary trends and standards. We must face the unhappy fact that the playing field on which the PEN/Studzinski Literary Award was contested was not a level one, and will probably not be level for a long while”.

In a handful of words Mr Coetzee manages to insult the winners, as well as all writers from the rest of the continent. To the winners he’s saying-“Okay you won, but not because you are good writers, it’s because institutional inequalities gave you a leg up.” How nice is that? If I was among the winners, I’d be less than pleased.

The weighted ethnocentrism of his remark has it falling flat on its face. If you look through the bios of the writers from countries outside of South Africa many are academics. Cameroonian Naomi Nkealah is doing her doctorate, Kenyan Ken Kamoche is an academic in UK, Nigerian Maik Nwosu is an assistant professor in USA, Nigerian Omolola Ijeoma Ogunyeni is an associate professor in USA, and Zimbabwean Novoilet Bulawayo is doing her masters degree at Cornell- these are no academic slouches.

I also find his condescending contention that writers on the continent are not in tune with “international literary trends and standards” very disturbing. Which trends and standards are those? Euro-centric trends? Writing in Africa has a style, grown from the soil of this continent. Perhaps a judge familiar with the “African literary trends and standards” may be more suitable to judge this contest. For if it is the case that the writers from the continent are so ill equipped to compete with the learned white South Africans, as Coetzee contends, why is it that those same writers have not taken over the Caine Prize? Why do Nigerians win? Ugandans? Kenyans? Zimbabweans? How did they manage to slip by the judges with their shoddy work coming from minds not schooled to the rhythm chosen by Mr. Coetzee?

SA PEN has done a lovely job by extending the contest to the whole of Africa. Now let’s have judges who can hear beauty in the literature of the continent.
Posted by Lauri at 10:58 AM

Hey...good, good, very good. You got something positive out of a bookfair...and congrats on the anthology too!

People are saying a lot of nonsense...get over it!

Perhaps a judge familiar with the “African literary trends and standards” may be more suitable to judge this contest.

Yes Bookaholic, our little book fair in Gaborone was VERY productive for me.

JD- thanks for the congrats.