A Pre-Dawn Engagement with Mr. Genet

About four this morning I heard the dogs going mad outside. It was still dark and because of the storm in the night the electricity was still out so I couldn't see what they had up the tree, but whatever it was was something causing much excitement. My husband woke up and the sun edged its way towards day and it looked as if Chelsea and her dog, The African Sausage Dog, had treed Sgt. Catman and Senor Ramon. What was going on? We don't have dog-cat wars in our house- harmony is the rule of the day. Had the social balance changed during the night?

My husband went out to the tree and called the cats. They, uncharacteristically, climbed down from the tree and came running to us. But still the dogs were going mad.

The sun climbed a bit higher and suddenly at the tip top of the tree we saw a long, thick, furry striped tail. I got the binoculars and was surprised to see a little foxy face clothed in a beautiful spotted coat. We had a genet in our garden! The dogs had not been chasing the cats, they were a tag team against the genet! 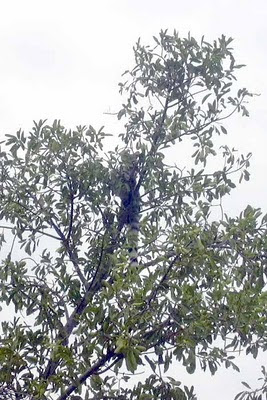 We locked the dogs in the garage and the cats in the house and waited. And waited some more but still Mr. Genet refused to go home while the coast was clear. Three hours later and the dogs were manic to get out and the cats locked in the missing Giant Teenager's bedroom were just about to crack the puzzle of the door handle and Mr. Genet had fallen asleep in his tree.
Now the plan was to shake the tree so Mr. Genet would be uncomfortable enough up there to come down here. My husband got the pole for the pool vacuum and shook the tree and Mr. Genet came down from the tree in a flash and promptly made his home in the back shed we call the Duck House. And as I write this that is where he is. 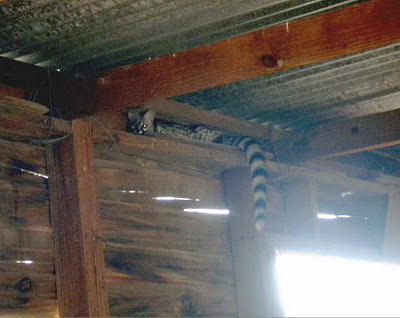 Here is more about our new guest. I hope tonight he'll have the chance to slip away to safety. Cross fingers- I'll keep you posted.
Posted by Lauri at 2:18 PM

What triggered my curiosity was the name Genet in the title of your post, since that's one of my favorite writers. I'm talking about the French author Jean Genet.

It's a cool name for a cat too.

It's interesting to read about your life in Southern Africa, which apears to be very different from Winterland >:)

Thanks for stopping by sorry if I tricked you a bit to get here. I'd never seen a genet before but it's face is much closer to a fox than a cat.

Never heard of that animal before. I looked it up in Wikipedia now. Looks cool. Never been to Africa neither, unfortunately >:)

I thought Jean Genet, too.

But writers write themselves into corners, not up trees so I knew it was a ruse.

This morning, I'm happy to report, the genet was happily gone and on with his genet-y life. :)

Some writers write themselves into corners, but Jean Genet wrote himself out of prison >:)

Look at his beautiful, long tail. I wonder how long he'll stay hidden away. Loved hearing about the tag team. They're a force to be reckoned with!

What a lovely post thanks for sharing it!! Petro Nosizwe

What a beautiful animal! I don't think I've ever seen one up close and personal like that, even in a zoo. I love encounters like that!