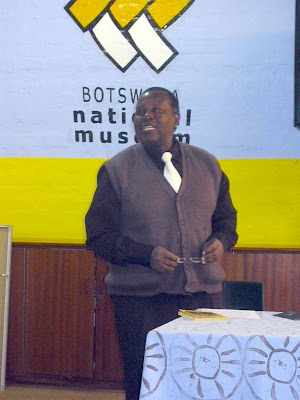 Saturday 26th June was the fourth Bessie Head Literature Awards held at the National Museum in Gaborone. Professor F. Mnthali from the University of Botswana English Department was the keynote speaker and read one of his favourite Bessie Head short stories, The Old Woman, from her collection Tales of Tenderness and Power.

Then there was the awarding of prizes and readings by the winners. 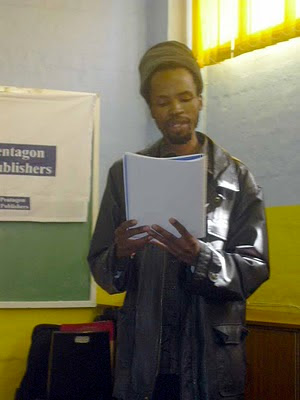 SHORT STORY:
Winner: Mr. Legodile Seganabeng, "The Moon Has Eyes"
First runner-up: Ms. Atang Mogome, "The Evil Messenger of God"
Second runner-up: Ms. Jelena Ivancevic, "The Rise and the Fall in All of Us" 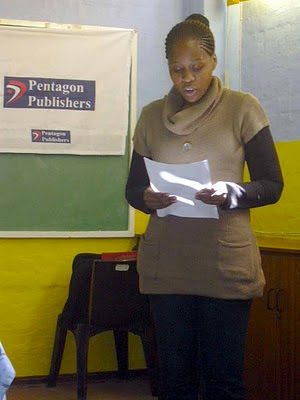 CHILDREN'S STORY:
(There's no photo for Jenny Robson as she was ill and couldn't attend. I read her story for her but we've seen enough photos of me) 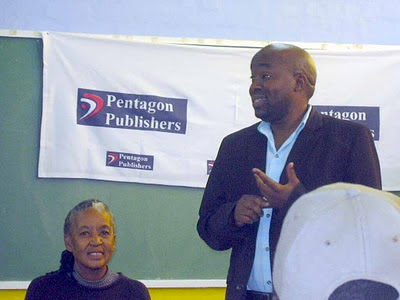 Above is a photo of one of the Bessie Head Trust members, Dr. Leloba Molema, from the University of Botswana, and Thulaganyo Jankey, sales and marketing manager of Pentagon Publishers, the sponsors of the Bessie Head awards for the past four years. He was launching the books produced form last year's awards.

Two of the highlights of the event was the open mic and the listening of a radio interview of Bessie Head. The interview was quite a surprise for me. I'd never heard Bessie Head's voice before. She was soft spoke but confidant and very intelligent, political and well read. It was lovely to listen to I wish we could have heard the entire interview.

For the first time the room for the event was overflowing with people. When open mic time rolled around there were plenty of people ready to read their work. The headmistress from Diratsame Junior Secondary School brought a few of her students from their writing club and one read her poem. Another secondary school student, Kolobetso Selemena (in the photo below), from Ledumadumane Junior Secondary School, also recited two poems. It was very exciting seeing such young people so enthusiastic about writing. 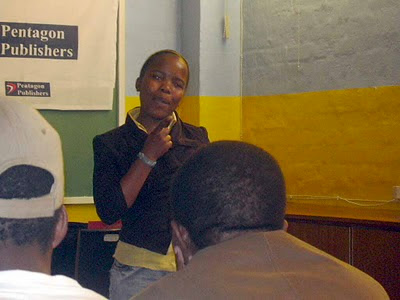 The Bessie Head Trust and Pentagon Publishers should be very proud of the way that this award has grown. It is now the only literary award in Botswana and it is finally getting the recognition that it deserves and serving the memory of Botswana's most famous writer with honour.
Posted by Lauri at 7:00 AM

It looks like a fabulous event to encourage writers and also create a venue for them to share their writings.

This sounds like a wonderful event and I love that so many people showed up.

(Congrats to Ghana for the win the other day - not sure when, I've lost track of days.)