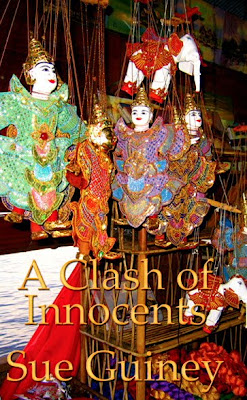 A Clash of Innocents is set in Phom Penh Cambodia. It is about a home for orphaned and abandoned children run by a 60 year old American expat named Deborah. A stranger with secrets appears one day and from then on Deborah struggles to keep things going on kilter. The stranger, another American named Amanda, carries secrets that Deborah thinks, once revealed, could harm all of them, but still they let her into their lives and their hearts.

1. It's told in first person. Against the current grain of thought, (as is usually the case with me) I love books in first person. This is told through the jaded, often tired, occasionally lonely eyes of Deborah.

2. I knew nothing about Cambodia before I read this book. Sue does a great job putting us there. We feel the weather and the celebrations, the sadness.

3. I love the character Samnang, Deborah's adopted daughter. I wanted more of her. She is loving and responsible and so fearful to follow her own dreams afraid of letting her family down. But when she finally does think of herself for once, I was her biggest cheerleader. A fantastic character with too small of a role perhaps. Maybe she needs her own book...

4. In the middle of the drama of trying to raise 40 children, which alone might have made a pretty good book, there is this puzzle of Amanda running through which keeps you wanting to turn the page.

5. This bit of the story from page 223:
"Airplanes do more than take you from one part of the globe to another. If you let them, if you need them to, they can also provide transitions, real, physical transitions through space and time. Suspended over earth in a large metal tube for hours and hours, a person can do more than just get from one place to another. You can move from one need to another, one purpose, one dream, one reality to another."
How true is that?!


Pop by next Monday for a stop on Sue's blog book tour and ask her a question if you'd like!

Note the book is available HERE.
Posted by Lauri at 7:00 AM

Thanks. It is a nice book. You should stop by on Monday and see what the author has to say about it.