Birthday Wishes and Other Stories 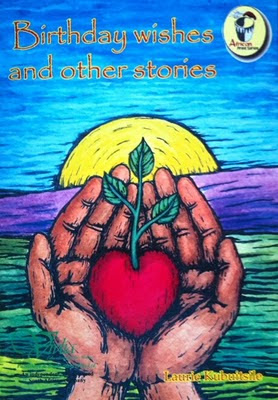 Last week I received some copies of Birthday Wishes and Other Stories a collection of three short stories for children published by Vivlia Publishers (South Africa). The stories in the collection inclde the title story which was highly commended in the senior category of last year's Baobab Prize ( which now has a new name - Golden Baobab Prize- and a new beautiful web site). The story is about two girls in South Africa, one a Zimbabwean, and how they deal with the xenophobia sweeping through their neighbourhood.

The second story is called The Only One With Any Sense to It about a boy who has to make a difficult decision between his family obligations and his dream to play on Botswana's national football team the Zebras. The final story is one that has been published in many places The Rich People's School and was first published in Mslexia.

I love the cover of the book and I really like this little collection. They're all stories about kids with problems who make a plan to solve them. This is important to me, empowering kids to sort their own problems out, sometimes a skill we fail to teach our children for fear they might make mistakes but we forget the mistakes are sometimes just as important as the successes.
Posted by Lauri at 6:56 PM

Sounds great! I do enjoy reading about all these interesting books from you..

That's a nice review on birthday wishes and others stories. That made me curious and interested ;-)