Five Things to Do In Central Botswana 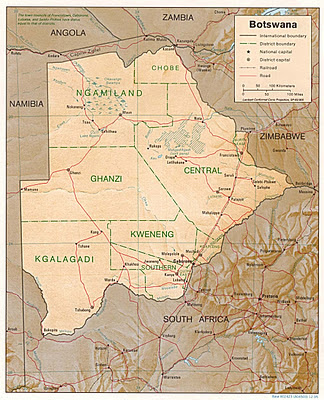 I live in Mahalapye which is in the Central District of Botswana, the largest district in the country. Most tourists zip through without stopping, heading to the watery north with the Chobe River and the Okavango Delta. But we also have some nice hidden treasures you shouldn't miss.

1. The Khama III Memorial Museum in Serowe
Serowe is the capital of the largest tribe in Botswana, the Bangwato. The history of the royal family is housed at the Khama III Memorial Museum. Our most celebrated writer, Bessie Head, also made her home in Serowe and the Museum has a special room dedicated to the writer. The thing I love best is the collection of photos of Sir Seretse Khama, our first president, and his family. The love story of President Khama and his wife Ruth is a touching one. Because she was white the British colonial government prompted by the apartheid regime in South Africa didn't like the marriage and did everything to stop it from happening and then frustrated them at every point. There is a photo that I love to look at there. It is of a pregnant Ruth standing on the dusty Mahalapye airstrip waving at a plane passing overhead. During this time, Ruth was trapped in Botswana and the colonial authorities would not let Seretse enter the protectorate. She had had word that they had changed his mind and he would be arriving on a plane in Mahalapye so she went there and waited but at the last minute he was denied permission to land.

There are many lovely photos there and a nice stop for an hour or two.

2. Old Phalatswe/ Phothophotho
Before the Bangwato moved to Serowe the capital for about 15 years was at Old Phalatswe. It can be found by going out the Martin's Drift Road toward the South African border and turning left to Malaka. Once in Malaka, you need to go to the kgotla to get permission. The National Museum is trying to formalise the area so you may be lucky to find a museum official who can give you directions.

For its time Old Phalatswe was a very modern town. It had a business district and was a stop on the stagecoach trek north. Now you can find the ruins of compounds and the once I suspect magnificent London Missionary Church.

After moving around the ruins you can climb down to the (normally) dry river bed behind the ruins of the minister's house. Follow the shady river left to its end and you'll find the beautiful Photophoto waterfall. Like an ampitheater the rock cliffs tower above you often with baboons at the top watching to see what you're up to. It is a beautiful place for a picnic.

3. Kaytee's Takeaway
In Mahalapye, Kaytee's Takeway is an institution. People heading north for years knew that it was the place to stop for a good dose of greasy food in the form of fish and chips or magwinya (fat cakes) or koko ya Setswana, or as we call it in our house- running chicken. If you're coming from the south, it's located right on the A1, on your left after the first robots.

4. Bush Walks
The Central District has some of the most beautiful areas for gentle walks in the bush. If you're a bird watcher, don't forget to bring your binoculars. Our family has had great walks around Mahalapye, Shoshong, Bonwapitse, Lecheng, and areas around Machaneng. You can stop your car most anywhere and find a lovely place to stretch your legs. A good place to start might be a walk up the dry Mahalapye River in Mahalapye with its wonderful granite boulders or the Lotsane River in Palapye.

5. Khama Rhino Sancaturay
One of my favourite places is the Khama Rhino Sanctuary located north of Serowe on the Orapa Road past Paje. You can go for the day or spend the night at one of their campsites or chalets. They also have a picnic spot with braii facilities. The park is a good size so you always see animals. There are white and black rhino as well as giraffe, zebra, waterbuck, kudu, springbok, ostrich, warthogs and much more. If you're a bird watcher, this is a fantastic place. We like to wake up early and bring a thermos of tea to the bird hide and wait to see what comes along. It really is a tranquil lovely place.
Posted by Lauri at 4:27 PM

I'd love to visit Botswana some day. It is a place that appeals to me a lot. Would love to go bushwalking and see the rhino sanctuary. Hopefully, one day.....

Can you believe we've never been to the Khama Rhino Sanctuary?? Definitely on our to do list though..

In Mahalapye on our way south, we usually only see the Shell Ultra City with a takeaway coffee at the "Whistle Stop"!!

i agreed with 2nd point that is the perfect thing. :)

There is so much in store for the holiday goers in central Botswana. Get on a cheap flight to Gaborone and see it for your self; the stunning museums, bush walk and a lot more.

Does anyone know where to find the photo of Ruth Khama waving in that airfield? I visited the museum several years ago and fell in love with the photo, but now can't find it anywhere online.