I Could Learn A lot From Pigeons 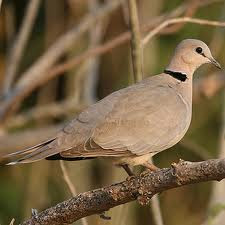 We have a pair of Cape Turtle Doves that like to frequent the birdbath and bird feeder in our garden. Since both are outside my writing office window, I spend a lot of time watching them. I've realised I can learn quite a few things from them.

1. Watch out for Your Partner
The doves rarely both go to the birdbath at the same time. One will tentatively drink while the other sits in the nearby tree to keep watch. As one half of a partnership, sometimes I lose track of this. I forget, and become selfish and think only of me. But looking out for my partner is part of the commitment I've made- "I'll be there for you". Keeping that commitment is part of honouring my word.

2. Learn to Adapt to New Situations
All species of doves come from the rock dove or the common pigeon we all know. Pigeons are probably one of the most adaptable animals around. They can be found on barren rock cliffs and in most cities in the world. For some odd reason, humans seem to despise them for that very reason- their adaptability. We instead cherish the most rare, the most vulnerable. But evolutionarily that makes no sense. The pigeon should be our champion. Environments changes, we all could live a life with less stress by learning to adapt quickly to new situations. I know I could.

3. Don't Bully Others
Doves are among the largest birds that come to our birdbath, but I've never once seen them trouble another bird. This can't be said for starlings or masked weavers. Even a sparrow will occasionally try to chase others away. But the doves just mind their own business. No matter how crowded the birdbath might get (and this time of year when it is very dry and extremely hot it can get pretty crowded) the doves just move over and make more space. It could solve so many problems if us humans could do the same. Just move over and make a bit more space for the guy next to you.

4. Mate for Life
Cape Turtle Doves, like most pigeons, mate for life. I am neither a religious person nor conservative, but I've found that making a commitment to another person, an unbreakable commitment, helps me to have a firm foundation from which to do more experimental things with the rest of my life. I can risk other things because I know I have a safe place to retreat to. I also learn more about me by having that constant changing relationship with another person. Maybe this is not for everyone, but I know it works for me.

This is beautifully observed, Lauri. I am an avid bird watcher, bird lover too and I have learned so much from watching them. Our behaviours - human and bird - are more similar than we realise. Love the photo!

I love the way you were able to bring their behavior back to us. The part that touched me the most was what you said about, "As one half of a partnership, sometimes I lose track of this. I forget, and become selfish and think only of me." I find myself feeling selfish many times and need to think of my husband and others more. Thanks for this.

Thanks Selma and Sonia.