Do Women Get a Raw Deal in Publishing? 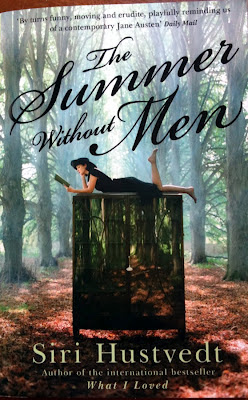 I recently finished The Summer Without Men by Siri Hustvedt and it left me confused and, frankly, annoyed. I knew nothing about the book in advance, in fact, I initially hadn’t intended to buy it but was at the cashier and realised I had bought books in a buy two get one free deal and hadn’t chosen the third book. The cashier was the one who recommended The Summer Without Men so I bought it.

The title and the cover would make you believe this would be a light book, in the chick-lit category, about a woman fed up with men and who decides to take a summer off to get some perspective on things. That is not what the book is about at all. The question becomes why did the publisher choose this cover, the cover one of the biggest parts of marketing a book? Even that title?

It’s quite a serious book about a woman who has separated from her adulterous husband of many years and is spending the summer with her elderly mother and her group of elderly women friends. At the same time she’s teaching a poetry class to a group of girls. It is almost everything except what the cover and the title suggests. Okay, there are no men, but that's not really the point of it.

This got me to wondering why would a publisher choose a title and a cover that purposely hides the real content of the book? I wondered too if a male author would have been treated in this quite underhanded manner.

It reminded me of the big literary debate in 2010 between, on one side the New York Times Book Review and on the other Jody Piccoult (author of My Sister’s Keeper) and Jennifer Weiner (author of Good in Bed). It started with a tweet from Piccoult. She was annoyed that Jonathan Franzen had received two glowing reviews by The New York Times Book Review for his book Freedom.

She said, “Is anyone shocked? Would love to see the NYT rave about authors who aren’t white male literary darlings.” Then Weiner stepped in to support her and said, “I think it’s a very old and deep-seated double standard that holds that when a man writes about family and feelings, it's literature with a capital L, but when a woman considers the same topics, it's romance, or a beach book—in short, it's something unworthy of a serious critic’s attention.”

I think the Piccoult/Weiner debate and my annoyance at the cover of the Hustvedt book are symptoms of the same problem. The established literary community still does not accept that women can write serious books about serious issues. If someone like A.S. Byatt does manage to break though that prejudice, she is considered nothing more than an anomaly.

Even the resources and hype that go into men’s books shows that they are overvalued compared to books written by women. Look at One Day by David Nicholls. If that book was written by Jane Doe, it would have been given a pink cover with a cartoon woman carrying a purse and it would have been relegated to “chick lit” and never a reviewer’s eyes shall see. But because a man wrote it, it was hailed high and low as a masterpiece.

JK Rowling knew the prejudice against women. She admits that’s why she used her initials instead of her full name.

And it is not just female authors spewing sour grapes either, facts back up the talk. From 29 June, 2008 to 27 August 2010 the New York Times Review of Books reviewed 545 novels, 62% of them were written by men. 101 of those books were reviewed by both the New York Times Review of Books and their Sunday issue, the Sunday Book Review, 72 of the 101 were written by male authors (71%).

People often criticise prizes like the Orange Prize that only allows books by women to be considered. The point of the Orange Prize and publishers such as Modaji Books (who only publishes women from Southern Africa) or literary magazines such as Mslexia (which publishes only women) is to try to address the inequities that still stubbornly persist in the publishing world. Until women authors are on a level ground with men, it is imperative that these equalisers remain in place.
Posted by Lauri at 12:08 PM

Oh yes...an important debate. I once thought I should force myself to write about war, just so that I wouldn't be seen as "just a woman's writer." It is an undeniable problem. The solution, though, is still not found, and although I applaud things like the Orange Comp, I don't think they really help as much as we would like to think they do. As far as the Hustvedt book goes, I bought it too. I haven't read it yet, but I didn't expect it to be a light read, but I bought the ebook and so wasn't swayed as much by the cover as by the blurb -- which is another interesting thing to consider.

Funny enough, I've read Myne Whitman complain that when she queried agents etc, they said they weren't really interested in romantic fiction set in Africa. They were pretty much solely interested in literary fiction from African countries. So it seems that if you're a female writer from an African country and your work isn't classed literary fiction then your chances of getting a publisher, at least in America, and going by Myne's experience, might be slimmer.

Then I think I'm a bit stuffed because none of my longer work could be classified as literary. I think as African writers we have other sets of problems, again created by publishers that we have to deal with. That needs to be addressed in its own post I think.

I didn't know anything about the author before I bought that book, I went forth soley based on the title and cover.

I haven't read 'The Summer Without Men' but the title does suggest somewhat trite subject matter, not what you have described. The cover is also quite light-hearted. Makes me think it is chick lit.

It's an interesting debate and one I have to consider further. I guess my attitude is that women still get a pretty raw deal in many aspects of life and particularly in business, so why not in publishing as well? The more I think about it, the more frustrated I become....