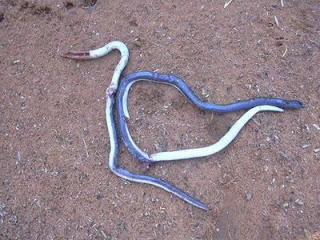 This morning when I went outside heading for my daily walk, the above is what I found. It was the nightly work of and her manic side kick, the African Sausage Dog. I’m sure they were very proud of themselves and a case can be made that they have provided a service. These baby snakes would likely have grown into the mammoth one I fear they originate from and I, and miscellaneous small children in this village, could have been put in serious danger had they been left to grow to their natural size. So I don’t blame the dogs for this act of murder, but it does raise quite a few worrying thoughts.

1) Has my garden become a nursery for snakes?

2) Are these the offspring of the mammoth monster which nearly ended my life a month ago (see ‘How not to look for a Snake’ in September posts)?

3) If so, how attached to their offspring are mother snakes?

4) Can snakes count? Will she notice the absent two? Or perhaps think that the two dead snakes are from her competition and think we are her allies?

5) Should I hide the evidence? Or leave it to be found when the giant mother is out playing the delightful game of ‘Scare the Bejesus out of the Writer Lady’ so that she might have the opportunity to mourn?

6) In general, are snakes retributionists?

I think, dear reader, you can understand how this whole thing has put me into a state. My husband has confirmed that these are black mambas, the almost most poisonous snake on the planet. I can’t help myself but I fear for the worst.

OMG, black mambas? I am freaking out. We have many venomous snakes in Oz like the brown snake and the taipan but they don't instil as much fear in me as the black mamba. I hope they don't seek vengeance. I don't know if it's in their nature or not. Thank goodness for African Sausage Dogs!

As you can see in the picture the head of one snake is gone. I've been watching TASD all day to see if he's going to die from the terrible poison. My husband just told me at lunch the poison is located somewhere else. He was a bit too confident with that answer and wanted no probing. I have a feeling he made it up. I'm keeping an eye on Buster.