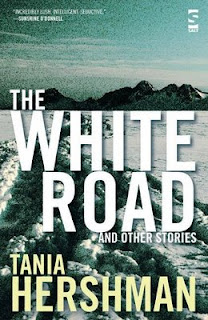 Excitement! Excitement!
Thoughts from Botswana is included as a stop on award winning short story writer, Tania Hershman's blog book tour for her book The White Road and Other Stories.

Tania Hershman (TaniaHershman.com) was born in London in 1970 and in 1994 moved to Jerusalem, Israel, where she now lives with her partner. Tania is a former science journalist and her award-winning short stories combine her two loves: fiction and science. Many of Tania's stories, which have been broadcast on BBC Radio 4 and published in print and online, are inspired by articles from popular science magazines. In November 2007, she founded The Short Review, a unique website dedicated to reviewing short story collections. For further information, visit the White Road and Other Stories. Tania blogs at TitaniaWrites.

See the tour stops below:

Here is one of Tania’s flash fiction stories which is included in the book, just to get a taste. Enjoy!


Someone behind started plaiting my hair.

Sorry, he said. Just given up smoking... hands fidgety... hang on.

I sat there waiting for the lecture to start, feeling the gentle tug as he pulled one section of hair over the other. My knees said, Marry him. Don't turn round, just decide.

We married six months later. His face was as delicate as his hands were dextrous, his temper cool and his love eccentric. He washed my hair, made me pies with pastry messages on top, grew prize-winning roses, and said that the washing up was his meditation.
When I cut my hair, he said that it was fine, that he could tickle my scalp now, but his hands were disappointed, and soon I smelled tobacco.

Stress at work, he said.

I talked to a wise friend, who said, Grow it back. My knees said, He should love you any way. I saw him in a cafe with a woman I didn't know. His fingers were playing with her curls. I threw up in a rubbish bin and went home. I found a pack of his cigarettes and started one a day, even though my knees weren't pleased.

I love you, he said in bed, when my hair had reached my shoulders again.

I know, I said, and fought my knees' insistence that I go into the garden and dig up his rose bushes.
Posted by Lauri at 3:15 PM

I have seen that every person wants to express their feelings but they are not able to express their feelings properly in words but the content you have written in your post is very beautiful, it seems that you have expressed your feelings Has expressed. Hi, you are a person who writes a very beautiful post, in the same way, you keep writing new posts in your life, our best wishes are with you.
Golf Course Road Escorts
gurugram call girls
call girls in Neemrana
Female Escorts Gurugram
Gurugram escort service
call girls in aerocity
Manesar call girls
gurugram phase 5 escorts
Palam Vihar Escort Servcie
Call Girls in Indirapuram