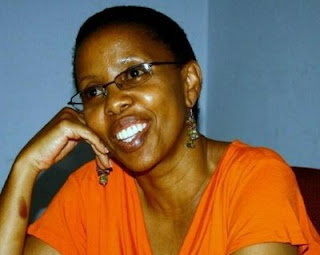 This week’s Botswana Gazette features a half page article about one of ’s well known writers, . In it she discusses why she decided to leave the security of her day job to set out to be a full time writer. She thought about it for a year then told herself, “People always talk about job security but what security really?” In these manic economic times she’s speaking the truth and, besides, what price do we pay for that security? According to Molefhe, “You need to create your own security.” We all need to define what security means and as she wonders in the article, "…if I was to die and not have done this…” So- she jumped.

But the fall is going pretty well so far. She has had substantial success in a relatively short time. She won the now (unfortunately) defunct Alexander McCall Smith Short Story Contest and pocketed P10,000 for her story “Who do you tell?”. She participated in the British Council’s Crossing Borders programme and had her story published in their magazine. Last year, she won highly commended in the Commonwealth Broadcasting Association Short Story Contest, a contest that has been a stepping stone to success for many African writers including the hugely successful Chimamanda Ngozi Adichie. Her stories have appeared in the prestigious Edinburgh Review, based Riptide, and a soon to be released Ama Books collection. She’s even had one of her stories translated into Italian. This year her story “Will it ever rain?” won third prize in the Bessie Head Literature Prize. Also this year she swooped into and snatched first place in the Woman and Home Short Story Prize from under the noses of the writers there. Success seems to be written in her stars.

In the article, Molefhe laments, as all Batswana writers do, the lack of a book reading and, more importantly, a book buying public in and the free fall degradation of the countries libraries.

When asked by the interviewer, Gothataone Moeng (who is, by the way, an excellent short story writer in her own right) when she will consider herself a successful writer, Molefhe said, “When my name is said in the same breath as other writers that I admire; when I see my books on shelves and not just gathering dust, that would bring me some measure of satisfaction.” That day will indeed come, Mma Molefhe, and I predict it is waiting for you in the not so distant future. Get ready.

All very true, I like how she responds to the question about "security" by saying, You need to create your own. So true. I jumped 18 months ago, and never imagined I'd be where I am now. It took a long time to make that leap, with the urging of one of my favourite writers, Ali Smith, during a course I took with her. Very glad I did, I don't regret it at all. Thanks, Lauri, for bring Wame to my attention, I will find some stories of hers to read.

The concern about readership is very important; I always fear that we may end up with more writers than we have readers. Publishers and readers should come together (can they, reall?) and figure out ways to nurture a reading culture. I also always suggest that we also need to start writing what our readers are likey to want to read: I find African writing to be too literary for leisure reading sometimes; there are readers of Stephen King, Daniel Steele, Virginia Andrews etc in Zimbabwe, for instance. Who is going to write our horror stories.

Wait a minute. Lauri, you also write detective stories, right? How has that worked out for you, in terms of readership?

Emmanuel that is exactly what I thought- there is no African readership because we need popular fiction in an African setting which my Kate Gomolemo books are exactly.

They are fast paced, short (20,000-30,000 words)with familiar plots and settings. Everyone locally who reads them loves them. The problem is marketing. The local publishers don't know how to market to a mainstream audience because it doesn't exist- they need to create it but they have been living off hefty cheques form the Ministry of Education and don't have a lot of incentive for leaving their comfort zone.

The first book was published by a big international publisher based in Botswana. They have done nothing accept submit to all Ministries in Southern Africa. This is not an academic book and was not written for that. I have shouted that at the top of my lungs but they couldn't hear me so now I've given up.

So the second book I took to a small local publisher and again said explicitly why I came to him and what I wanted. Now there is no marketing at all. The book was published and sits. I have four books finished in the series and I have no interest really of having any more published though I have publishers who want them. Why bash my head against the wall?? Perhaps I should self publish and do the marketing myself but that would take so much time and I have far too many pots on the stove right now.

My take is the books must be 1) Cheap and 2) Everywhere, not thrown in the African section with the international best sellers plastered all over competing for the buyer's attention. Then maybe the readers will begin to grow.

I absolutely agree with you Emmanuel. In so many ways African literature is far too serious. Let's lighten up folks. It really isn't all doom and gloom.