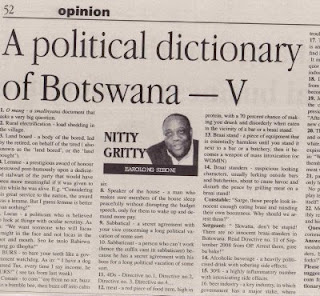 People outside of Botswana probably know little about the recent ruckus in the country over alcohol. Since our new president, President Ian Khama, took power he has been threatening to sort out the country in terms of alcohol. It is a well know secret that he does not drink and has a hatred for the stuff, believing it is the root of many of the country’s ills. He’s not far off base perhaps, but history has proven closing up bars and shebeens and making alcohol illegal does not stop people from drinking, but rather changes drinkers into law breakers and pushes the industry underground leading to all the problems associated with underground illegal activities.

The government has also stopped bars, butcheries, and liquor stores from setting up braai stands (barbecue stands) where people can braai meat when they’re drinking, a very common practice in the country, hoping somehow that if there is no meat there will be no alcohol.

Poking fun at these issues is well known poet, Barolong Seboni in his column in Mmegi called ‘Nitty Gritty’. Of late, he has been giving us weekly instalments of “A Political Dictionary of Botswana” explaining the real definitions, as per Mr Seboni, of political terms in the country. Very funny indeed. For example: Speaker of the House: a man who makes sure members of the house sleep peacefully without disturbing the budget speech, only to wake up and demand more pay.

Seboni added quite a few terms this week having to do with Khama’s anti-liquor campaign. Here are a few hooters.

Meat: a red piece of food item, high in protein with a 70% chance of making you drunk and disorderly when eaten in the vicinity of a bar or a braai stand

Braai Stand: a piece of equipment that is essentially harmless until you stand it next to bar or butchery, then it becomes a weapon of mass intoxication (or WOMIN)

Braai Standers: suspicious looking characters usually lurking outside bars and butcheries about to cause havoc and disturb the peace by grilling meat on a braai stand

Beer Industry: a key industry in which government has a major stake, where trouble is brewed

To Be Bottled Up In A Beer Can: this is an idiomatic expression that will soon find its way into out daily language. It means to introduce heavy taxes on liquor only to find that you own the beer industry
Posted by Lauri at 7:33 PM

I had to read this to my hubby and he cracked up. What a hoot!

It's funny, of course, but scary too. There are only a few ways I can legally take a break from spinning brain; not sure what I'll do if they remove alcohol!

I have seen that every person wants to express their feelings but they are not able to express their feelings properly in words but the content you have written in your post is very beautiful, it seems that you have expressed your feelings Has expressed. Hi, you are a person who writes a very beautiful post, in the same way, you keep writing new posts in your life, our best wishes are with you.
Golf Course Road Escorts
gurugram call girls
call girls in Neemrana
Female Escorts Gurugram
Gurugram escort service
call girls in aerocity
Manesar call girls
gurugram phase 5 escorts
Palam Vihar Escort Servcie
Call Girls in Indirapuram