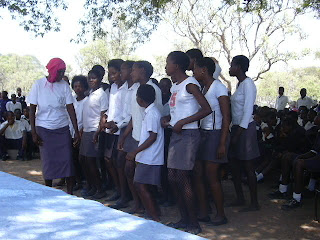 I spent two days in Serowe at a workshop on the 2003 UNESCO Convention on Safeguarding of the Intangible Cultural Heritage (ICH). It may sound slightly boring, but in fact it is fascinating. It is all about saving the parts of heritage that we can’t touch things such as language, dance, song, and proverbs, but also other less obvious things like body language and gestures. The Department of Culture and Youth is moving around the country (doing quite an excellent job BTW) meeting with stakeholders to consult. After this it will go to Cabinet and Parliament who will decide if Botswana should sign on to the Convention. Culture is suddenly taking its rightful place in Botswana, so it is likely the Convention will be ratified.

Our facilitator at the workshop was Zimbabwean dramatist and writer Stephen Chifunyise. He is so passionate about his culture it is infectious. He very easily showed us where Botswana’s ICH is endangered in many areas. Our dances, for example, are slowly changing being influenced by modern dances to the extent that sometimes the original dance and its meaning have been lost. A lot of ICH is lost in this manner. Colonisation and modernisation have done a severe number on ICH all over the world.

He told a story about a dance in Shona culture called Mbende. The dance represents human creation. It is danced by a man and a woman who are eventually synchronised in their movements. At one point, they come together and push their hips at each other. When the missionaries went to Zimbabwe they looked at the dance and immediately banned it thinking it was too sexual. The dancers didn’t want to leave this important dance behind. To them it meant the synchrony and union of man and woman to create a family, a very important part of their culture. So they thought and decided to give it a Christian sounding name, that this might appease the missionaries. So they called the dance Jerusalema. Voila- all was fine with the church and they continued with their dance. Then independence came and the dancers were sure that maintaining such important cultural heritage would be paramount in the new administration. Within a short time, the freedom fighters, still struggling with their colonised minds, banned the dance at all government sponsored events. This nearly led to the loss of Mbende/ Jerusalema. Luckily cultural workers in Zimbabwe applied to UNESCO to have the dance declared a Masterpiece of Human Creation. The application went through and now they have been given a large sum of money so that they can safeguard this important dance.

Though in Botswana we haven’t had any out right banning, some traditional Setswana songs are not played on the national radio stations because the station administrators believe them to be suggestive and yet they play all sorts of songs from America which are far more suggestive. This is the same sort of censorship that can lead to important ICH being lost.

For myself as a writer, I think I have a role to play here. I made some very important contacts and am looking forward to seeing where this path leads me. Exciting, exciting.
Posted by Lauri at 10:37 AM

This is such an achievement I think, to succeed in preserving an important piece of cultural heritage. Bravo to you that you are looking for ways to be involved. Thanks for the interesting post - I learn so much reading you!

I'm glad you found it interesting Kayt. I actually have already played a small role in preserving ICH. In the science textbooks I write I try to include as much local traditional science as I can. For example, in one book I wrote about the many methods that traditional Setswana culture had for preserving the environment such as totems that could not be killed, the control of hunting and cutting of trees by the chief and beliefs that preserved certain species.