Once upon a time, not so long ago, a group of writers met. Not in blood and bones, because they were kilometres and oceans apart, but in the wires, in the air, in that odd nebulous place that can’t quite be envisioned and maybe isn’t always believed in- cyberspace. These twenty odd writers met and their leader, a stubborn man living in the land of literary giants, kept the wayward group together because he had a plan and he would not be deterred. He wanted the voices of the world, the part sitting, in the descriptions of others at third place, to step forward and speak. He wanted to hear how those people might define their own lives. He thought something special might just happen if together this group of writers could work towards this common goal.

And so the writers wrote. They wrote and shared and critiqued and discussed and laughed and sometimes even fought, all of it leading toward the goal, written in the dreams of their leader, for he wanted a book. A book of these writings.

The writers got to know each other. The coming together created a crazy domino falling magic that knocked against them pushing them out of line in a delightful way. Accolades and prizes rained down and the writers celebrated each other’s successes. A camaraderie formed that pulled all of them forward.

Then yet another child of this extraordinary country, this country that has given so much to the written world, came forward to help the leader. She took the dream in her hands and moulded it and rubbed off the sharp edges and then she threw it hard and with determination into that scary land; the land most writers fear, the place where horrifying stories are told by the wounded and walking dead- the land of the publishers. (EISH!)

But what the group didn’t know was that there was a publisher who was waiting for just such a book. The woman, the daughter of the literary giants who already walked tentatively in their footsteps, threw the ball of dreams so straight, so accurately, she scored one with one and the book of a dreamer found a publisher in waiting.

And the dream gained form. It went from dots and fuzz to concrete lines and paper and ink. From a thought to a reality, grown from a beautiful connection made among a diverse group of people in a make believe place. A fairy tale of a story not normally believed in the sceptic, jaded world of sad stories and sadder realities.

for it has happened. 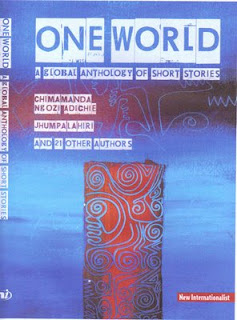 Out during the Northern Hemisphere Spring 2009!!!

Published by The New Internationalist.

Yahoo for you all indeed. Very Inspirational. I'll be ordering a copy, if that's possible. And

I have decided to give you a BFF (Blog Friends Forever) Award.

Wow David Thanks!
Yes, in the spring they will be selling on Amazon and other places. All money goes to Doctors without Borders- so please buy!!

Wow!!! You guys managed to snag Jhumpa Lahiri - The Queen Bee of Short Stories - That is Ab Fab. If I recall correctly, she was not in the original line-up (in fact the list of writers has swollen beyond expectation). But if nothing else, her contribution would generate media/mass interest, which in turn would be good for sales and ultimately, the charity that would receive the proceeds. This of course is not taking away from any of the other writers many of whose works I have read. I can't wait to get my hands on a copy of the book as there is almost guaranteed to be some fantastic stories (at least I hope so).

Well done to all the writers (and to Ovo for spearheading the project).

In fact, one of our members, Vanessa Gebbie, spoke to Jhumpa and they met and she agreed. Our original working group did not include Henrietta, Chimamanda or Jhumpa. We already had the publisher before Henrietta and Jhumpa were on board, that was just icing on our cake. Quite an honour that they chose to give us stories.

I have read all of the stories except for Jhumpa's and I can assure they are lovely and diverse. A collection I am indeed proud to be part of. Thanks for your encouragement SMC.

What a beautiful post, Lauri. It gave me goosebumps and hope, all at the same time.

Congratulations on this event. I can't wait to get my hands on a copy and tell everyone I know, "That's my friend Lauri from Botswana!"

Inspirational, indeed. Dreams can come true, right? Congratulations to you and all of the writers!

Thanky Ms Karen and Selma!
As soon as the book is out I'll let everyone know. But Karen you may be disappointed as I think you read my story in there- Rich People's School. I joined the group at the beginning of this year in the middle of writing three books under a severe deadline so had no time to submit anything new.Anyway- you'll get to enjoy all of the other wonderful stories.

Lauri, you do us such great honour!

Thank Ovo- you're the man!

Hats off and cheers Lauri - I can't wait to be able to read this book - It sounds like it was an awesome project.

The fairy-tale feel of the post was just lovely also :-)

Thanks for your support, Kayt. I'll let you know as soon as it is available.

Groovy is a cheapskate who rarely buys new releases, but she WILL buy this one. Notify me when it hits the U.S. of A., please!

Definitely, SGOLY. Thanks for the support.

Congratulations! I know how long you've all been working on this and how much you put into it. What a great achievement!

And good on Yahoo for jumping in to publish you. I'm sure they will have a unique approach that will be very interesting to watch.

PS: Hey! You've removed my option to leave comments as me!