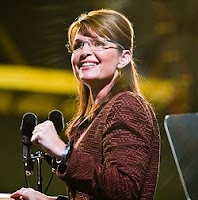 The Republican Party in a bid to breathe life into their moribund campaign roped in the Alaskan governor. They wanted to divert the public’s attention away from the Obama Magic that was blinding people after the Democratic Convention. They thought they could hoodwink the American people. She would snatch up the disgruntled Hilary voters. She would snag the far right who were alienated by John McCain’s centre position. She did all of that. Now they want to hang her out in the wind to be bashed around like a piñata to try and get people to believe that the problem of their party is just this little add-on that can be excised with a slice of a sharp knife. Not quite, folks. The Republican Party’s problems lie far deeper and sorting them out will likely have tsunami like repercussions.

Now it’s all about leaking tit bits to Fox. She couldn’t name the countries in Africa, wasn’t even sure we weren’t one big country. Yeah so? I doubt George W knows eight years after being commander –in-chief and certainly didn’t know at the start of his first term.

Watching all of this is sickening. The question I keep asking myself is “Would they be doing this if she were a man?” The answer is a resounding “No!”. She was pulled out of the Arctic to trump up a campaign that was dead in the water. She did it at quite a significant personal expense to herself and her family. I am no fan of Sarah Palin and her right wing fringe perspective, but I do think she is being treated abysmally. Where is the magnanimous John McCain now? Why can’t he step in and stand up for her? Why can’t he sort out his undisciplined team, members who are too cowardly to step forward in the light of day with their ‘information’, but instead whisper it anonymously into phones in the dark of night. Shame on them!
Posted by Lauri at 11:00 AM

you are right. That is politics in action for you.

I don't think it's because she's a woman. Would they have treated Hillary in the same way? I don't think so. Sarah Palin just set herself up for this by not thinking anything she said or did through properly. She's too naive for politics.

Daoine, I agree with you, she is definitely too naive.

But for the entire campaign, I couldn't help but feel that she was to be the "out" for McCain; a graceful way to lose and still save face. If she hadn't been so naive, she might have been able to see it coming.

I almost feel a little bit sorry for her. Almost. ehh, ok, not really.

I was the biggest critic of Ms Palin during the campaign but I DO feel sorry for her now. Anyway, she is a politician and knows how those folks operate.