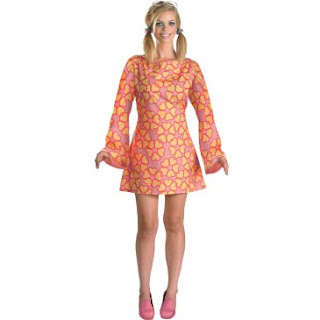 I was searching for something else, but as is my usual way to procrastinate, I started looking for answers to some nagging questions by looking them up on the internet instead of attending to my work like a good writer.
At the back of my mind for a few days I'd been trying to remember Barbie's friend's name and look what I stumbled across! Is this a find or what? My gosh- imagine how much life we miss everyday by just attending to our business! What is it I've discovered? It's Barbie's back story! Ooo... FUN!
Most of us knew Barbie's boyfriend was Ken, but do you know his surname? Ken Carson- sounds very male model, Barbie's-my-cover, I'm actually gay- if you ask me. To be honest, I sort of knew Ken was gay all along, Carson just sort of hammers the last nail in the coffin. There is something about an ascot that doesn't scream heterosexual.
And who knew Barbie had parents? George and Margaret Roberts kept a very low profile, letting their daughter fill the spotlight while they lurked behind stage. Or perhaps there's something else behind that hiding in the shadows, George and Marge ......hmm?? Could it be the deep dark secret you've been trying to hide all of these years? Could it be that you didn't want the world to know that Barbie- yes, that tippy-toe-walking, perpetually-non-droopy-nippleless-booby-having, always-inexplicably-smiling daughter of yours was a result of a teenage pregnancy?
Yes, I'm sorry to say that is the only conclusion that can be made. Barbie was born in 1959 and in 1999 (!) Marge gave birth to Krissy, Barbie's youngest sister. If Marge was 20 when Barbie was born she had to be 60 (!) when Krissy was born. What doll gives birth at 60?
Come clean Marge, this is 2009. We understand things now that people (and dolls I assume) just couldn't accept in those post WWII years. Unburden yourself, secrets are very stress inducing, cancer causing even. We wouldn't want to see MmagoBarbie going down like that.
Gosh -and who knew Barbie was so popular? I count 61 friends- real life friends. That's more than I have in Facebook. In the 60s Barbie had friends like Midge Hadley; by the new millennium, she graduated to friends that didn't wear hairnets with names like River, Summer, and Ana Suarez.
And what's the story with Melissa? The Wikipedia article says "didn't exist (stripper barbie) liked being naughty". What does that mean? If she didn't exist, how does Wikipedia know that she likes being naughty and that she strips? Curious. I think it's another of George and Marge's dirty little secrets. Barbie has multiple personality disorder. When she takes on her "Melissa" personality.... well ... she gets a bit... naughty.
It's odd with Barbie so popular, Ken only managed to be friends with the partners to Barbie's gang members; Midges' husband, Tracy's fiance, and the womaniser Stephen, who dated two of Barbie's friends- both Christie and Nikki. That must have been awkward for Ken and Barbie. I suspect Barbie keeps Ken on a very short leash with the latent homosexuality and all, and doesn't let him make his own friends. I feel sad for Mr. Carson. I doubt bossy-Barbie even lets him wear ascots any more.
How fascinating Barbie Roberts-Carson's life has been though (I'm sure she's a double barrel kind of gal)! Besides being a model and in numerous rock bands, she appears to have been a terrorist at some point when she was part of the Barbie Liberation Organisation (BLO?!?).
Oh, and by the way, Barbie's friend I was trying to think of was the very groovy- PJ. I remember she had psychedelic bell bottoms and purple sunglasses. I'm glad that's settled. Now I can finally get back to work.
Posted by Lauri at 7:00 AM

Did they ever get married? I'm sure there could be a green card story behind all this!! lol

Well Barabie of course has loads of wedding outfits so she and Ken either got married or she is quite pathetic.
Was Ken not American? Well then that explains the ascot!

Now I'm wondering if the article included references to Barbie's OTHER guy friend, Alan. He was, in my opinion, much cuter than Ken, even though he lost his head in a horrific accident when he turned to abruptly to see what Barbie was doing. Very sad. I still have the head, and the body is around here somewhere, too.

Awesome post, Lauri. Now I want to go find the article and get caught up on all the news.

Ms Karen glad you liked the post. Sorry about Alan, or should those condolences go to that cheater Barbie. The more I get to know, the more I'm not liking this chick.

I always wondered about Ken...there was that very suspicious smooth area - what could it mean?

Love the back story and I procrastinate in the same way; trolling the internet. To my credit it starts off well by looking up things I need to know. However, I soon track off to other things, usually because I'm so interested in the subject I'm researching that I start thinking "But what about..." and "What happened" and "Who are you..." which result in very little writing.

Where does Midge come in? She was there somewhere as I recall.

This was so funny, Lauri.

As it happens, I'm sitting in the Denver airport and laughing. People are slowly moving away....

I never knew Barbie's back story. What an informative blog you put out, Lauri!

When I was a kid my cousin told me that he was in love with his sister's Ken doll. He used to position his sister's many dolls, (she had several Barbie's, two Ken's, and several of Barbie's friends too), in various unseemly positions and leave them out in the open, to freak his mother out. My cousin grew up, and came out of the closet at 22. No big surprise, we all knew.

Hehe. You are too cheeky Lauri.

Elspeth- Midge is Barbie's friend, one of the first ones. Funny I watched an old Ally McBeal the other night and a guy told Ally and a blonde woman who I don't know her name that he thought of them as Barbie and Midge.

Helen- Isn't that nice when people think you're a lunatic? Try reading Bill Bryson in public.

Elizabeth- I try my best to be relevant. I don't like blogs that babble on about silly things. :)

Maxine- I was just trying to get to the bottom of a few mysteries- I am a writer anyway.

I used to have a few Barbies and a PJ. I even had a Skipper. But I had no idea there was an Alan on the scene (thanks Ms Karen).

Barbie's life was just full of intrigue. She has an enduring appeal.
What a fantastic post!