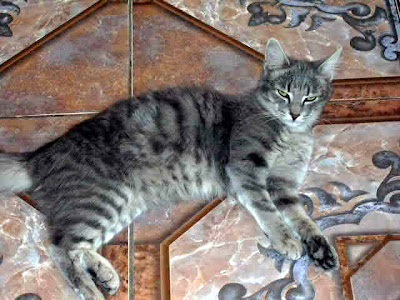 I have to say it- my cat is an ugly teenager. She has gone all pointy and long and thin. Her face is a bit reptilian. She has this odd sort of fur now- not quite long hair, not quite short- sort of tufty in spots and almost bald in others. Not attractive; no cat shows for this one. She’s taken on a few characteristics that I don’t appreciate either. Since she lives only with dogs she seems to have adopted behaviours that don’t fit her species. The worst is rolling in dirt.

My dog Chelsea is a Jack Russell, and people who own Jack Russells, at least here in Botswana, will know what I mean when I say that their perfume is poop. Chelsea’s preferred scent is cow poop. If you don’t pay attention, when she finds it she will roll in it in a hedonistic way until she is covered then get up and prance around showing off how sexy she is.

Chelsea’s dog, Buster, the African Sausage Dog, is under the impression that a handsome sausage dog is a sausage dog covered in bits of dry leaves and grass. He will roll in them and then very carefully, almost in slow motion, walk through the sitting room so none fall off (but of course they do leaving a trail on the carpet) giving everyone the chance to appreciate his magnificence.

Catman watched these doggy behaviours and has decided rolling is a family tradition and she has chosen dirt as her speciality. So to pet Catman is a bit like giving Pig-Pen a hug. Clouds of dust billow and invariably you need to sneeze.

The other very annoying habit of Catman’s is her particular whine when fish is within a 5 km radius. It’s a “don’t be stupid- just hand it over” whine. I don’t get it. This cat was born in Botswana. The biggest body of water she’s been near is the dog’s water dish and yet from day one she knew the scent of fish. All fish- tinned, frozen ,fresh- it is hers and you will submit.

I wonder how long cats are teenagers because I am not liking this Catman phase.
Posted by Lauri at 11:49 AM

am still at Zero's place.will be leaveing shortly

Cats are wonderful. In this house we pay homage to Kirk - a cat who wants you to announce yourself before you enter the room. He is suspicious of everyone and will look at you with a penetrating glare.

I love how he matches the tile floor he's lying on. Don't be too hard on him, teenagers cannot help being teenagers.

I think it is ingrained in the feline psyche to recognise the smell of fish. It's like a premenstrual woman and chocolate - I could find that chocolate bar under ten layers of concrete if the time was right.

I think cats do go through stages just like children do. And yes, the teenage years are difficult....

It must be ingrained at birth, Selma, becasue I just don't get it. Catman wouldn't eve recognise a fish if sat down next to him.

I can assure you that rolling in dirt is a fundamental trait of almost all cats I've ever met.