Today we get to meet Catman's kittens!

These photos were taken on Sunday and their eyes were not yet open. Below see all four kittens. I tried to put them in order of size but they are very unruly. The calico is the smallest and in many ways the stupidest. She is frantic to find a nipple to latch onto, but useless with navigation. There is an all grey one, a grey and white one, an orange tabby with white and the calico. Do not ask me which is male and which is female- that's how we got into this situation. I do know the calico is a female, since genetics dictate. 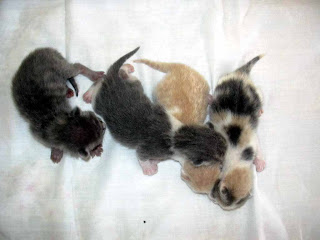 Below is Catman in typical ambivalent mother mode. The soundtrack for this photo is- 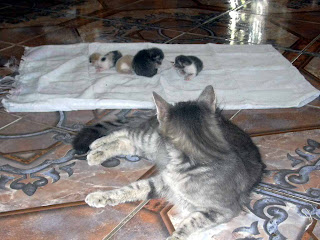 This is a close-up of the grey one with white. The only photo I have where one of them stayed still and faced the camera at the same time. 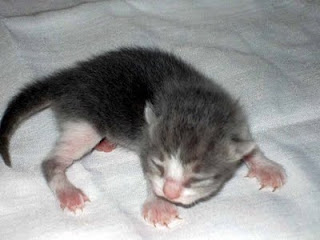 Three kittens being contrary and looking away from the camera. I fear they've taken their mother's personality. (The grey one is quite darker- darker than Catman, he's the biggest too. ) 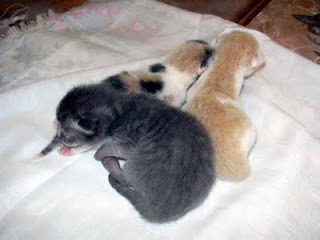 ....and The Catman herself. What is she saying?
"When will this be over?" -in her typical ambiguous way. Did she mean the photo shoot? The parenting gig? One never knows with Catman. 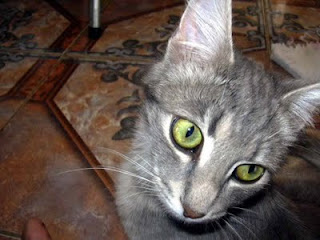 Kittens!!! If it helps, odds are the orange is male; female orange cats are incredibly rare.

Thanks for that info Elspeth, I didn't know that.

Oh! Oh! Oh! Look at the tiny claws.
See how sharp they are.
Like tiny needles.
Ouch, Ouch, Ouch

I heard that orange tabby's cannot possibly be male, that females with orange are always calico. But I'm not an expert. That dark gray one is a giant. Catman looks like she'd rather be out mousing.

Catman is thinking, Look at me, I'm so sweet. You'd never guess that when I get my claws on the cat that caused this, I'm gonna shred him to bits. Purr, purr. Meow.

I have had a bazillion cats in my life thus far. Elspeth is right about the genetics of an orange cat which is my fav, but I had an orange female once. Her name was Sharron. Long story and yes it was spelled that way. I didn't know she was a rare -then.

Catman is thinking, How did I get myself into this and more importantly, how do I get out??

PS I lost my 11 year old kitty last Friday. They are such good friens.

Bonita- I got a fright too when I saw the nails on that grey/white one.

Elizabeth- At university I lived in a coop and we had a big fat male orange cat. He was lovely. I'm thinking of keeping one of the kittens and I'm leaning toward the orange one because of that.

Helen- the funny thing is ever since this post came out, Catman has become an exemplary mother. I think she read it.

Journaling Woman- I'm so sorry about your cat. It's sad to lose a pet.

OK, I've recovered now - but they are seriously cute!

Selma -today the big fat grey one opened one eye.He looks like a little pirate. The other ones still want nothing to do with the world beyond their eyelids. Today they are 10 days old.

AW noo-noo! Can I have one?