The Cloths of Heaven- Review 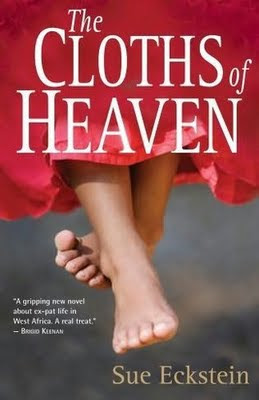 The Cloths of Heaven by Sue Eckstein

When you sit down to read The Cloths of Heaven you should know that you are entering a spider web; a spider web of connections between a vast cast of characters. Ms Eckstein brings the characters to the reader in tiny drips; a scene here, a thought, a bit of dialogue. She is expert at adding layers to give depth. Each time you make a stop at a character a bit more is given, but only a bit, to add flesh and dimension. Nothing is extra, a skip of a line or two will have you missing a connection in the intricate web and a bit of the tale Eckstein is weaving.

The book is set in West Africa and revolves around a group of expatriates. The cast is multitude. There is the cheating high commissioner, Alec, and his equally cheating wife, Fenella; Isobel and Patrick who are some how connected with the British Council and by default a few rungs down on the social hierarchy; the surly, enigmatic Rachel Kayne who works in the cloth shop; Daniel Maddison the new arrival at the High Commission, and the vile, entrepreneur Bob Newpin to name only a few. Back stories hover in England where Daniel’s Aunt Eleanor visits Stanley Shea at the nursing facility where he lives after shooting half of his head away in a failed suicide after his West African servant decides to get married. Isobel and Patrick’s son has moved in with Daniel Maddison’s sister, while Rachel’s grandfather has gone “bush” and appears time and again in half page accounts of his traipsing. Everyone is connected and knocking into each other in delightful ways that can only happen in a novel, but at the same time are what make novels so wonderful.

Ms Eckstein’s talent is in characterisation and dialogue likely from her experiences in play writing. People talking is what seems to interest her. She has had much success with plays having written among others The Tuesday Group, Kaffir Lilies, Laura, and Old School Ties, many of which have been performed on BBC Radio 4.

Stop by Thoughts from Botswana on Tuesday the 18th of August when the author of The Cloths of Heaven, Sue Eckstein will be here to answer questions about her book and the writing process. If you've read the book and have questions you'd like answered please send them through to me.
See you then!

See the entire blog tour for The Cloths of Heaven below:

I've ordered the book from Amazon.co.uk and it should arrive any day now. Can't wait to read it!

I hope you love it.

Great review! I look forward to the interview.

Sounds great. And what a line-up of blog stops!

Thanks Caroline and Sue.

Sounds great! I love all the weavings in and out, I look forward to hearing more from the author about how she did it.

Tania- come back on the 18th I asked her that very question- how she kept track of all of the characters and their storylines.

This sounds like a really interesting book. I usually shy away from books with a ton of characters. I have enough trouble sometimes keeping three or four in my head. But I like the idea that characterization and dialogue are the author's forte. Thanks for the recommendation.

Brilliant review. I too loved this book.

Helen happy you liked the review. Thanks.

You have given a variety of unique information that impressed me to read your blog very thoroughly. As your blog is very informative and unique. I suggest all to read it must. . The complete information is very vast and knowledgeable. I have bought some fashion stuff from this site Pakistani fancy dresses with prices and found very valuable. Every person should try.

we are the best high quality Sportswear Manufacturers

we are the best high quality Uniform Manufacturers