Meanwhile Don't Push And Squeeze: A Year of Life in China by Robert Berold 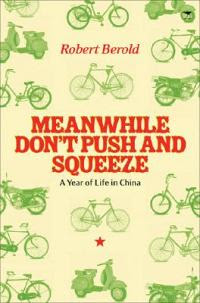 Meanwhile Don't Push and Squeeze: A year of life in China is the account of South African poet Robert Berold's year in Hangzhou, China teaching English. It's a delightful book for so many reasons not least of which is Berold's attitude to the whole experience. Before arriving he already had an awe for the culture, literature (in particular poetry), and the beautiful calligraphy of the country. This love brought about an intrinsic respect for the culture that echoes through all parts of the book. In many instances the heat and polluted air and the constant crowds weighed on him, but he never became the 'disgruntled expat'. His wide-eyed interest in the country comes through on every page. It nearly had me wanting to rush off to China myself, even with my pathological hatred of crowds, so that is indeed saying something.
He travelled quite a bit while he was in China. In one part he visits a student's farmer family. The house he stayed in astounded him as it was so dilapidated that it had no walls and it was winter, but yet the overwhelming hospitality of his Chinese hosts was humbling. This was the case throughout his travels.
I loved the whole of this book, but the best parts for me were the bits of writing he included from his students at the university. It gives the reader such insight into their lives and the lives of the people they interact with. There was a lovely assignment where they had to interview someone they didn't know. This produced windows into the lives of typical Chinese. The immense pressure they are under to work, often separated from their families far away. Their commitment to the success of their children, especially their fear they won't do well in school and get into good universities. The students' writing in many places is so beautiful in its honesty and simplicity one is shocked that they are writing in a second language, one so very different from their first.
Of course a book about China would not be complete without the crazy translations found on signs and labels and these gave me more than a few giggles. The title itself comes from a sign board at a tourist attraction.

Sounds like a good read. We sold our house four years ago, when we moved there it was out in the country. We owned it for 21 years, as the years went by Chinese immigrants began to move in by the droves. Then they built the largest Buddhist temple in the Northern Hemisphere and they kept on coming. The stores changed to Chinese stores, with a few Korean establishments thrown in. The streets were jammed, every strip of land built on. I couldn't take the crowds. But my children went to school with Asian kids and we befriended many kind people. Their culture is so different that ours, and the food! Oh my, that's what I miss the most, that food. Our old town is about 2 hours away from where I live now. And you wouldn't think it could get more crowded, but it is!

Thank you for telling me about this book. It sounds fascinating. I'm with you, I'm not fond of crushing crowds - but reading about them wouldn't be bad.

Helen I hope you can find the book. I linked it to Kalahari if you click the cover. Not sure how the shipping charges will be your way.

Elizabeth- I realised just now I forgot to wish you Happy Birthday- hope it was a lovely one!

Lauri, this is another example of how much we need to be able to ship books electronically and then print them on continent of choice. I can order the book on Amazon (US). Amazon will ship free to me. The wrinkle is that the book, a paperback book, a mere 12 ounces/246 pages, is $24.00. I'm assuming the cost of intercontinental shipping has already been added to book price. I think Helen Ginger (straight from Hel) had an interesting take on this on August 22, 2009 (Kindle and Espresso.)

Bonita though I'm sort of a stick in the mud when it comes to ebooks I think you're right. Also, BTW, the publisher for I Ain't Yo Bitch said that the book is available at Amazon now though only one copy. Distribution is seriously a problem. I imagine the price will be problematic again too.