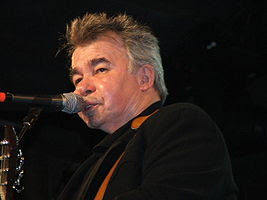 I was watching this odd little show on BTV the other night. BTV like most government departments is cash strapped. My thought is that somewhere, I'm not sure where, there is a pool of free programmes for television stations to use as they like to fill in gaps in the programming schedule. BTV is dipping into the pool so often their arms are perpetually wet. They're usually born again Christian things or profiles about rich people and all the crap they've managed to pile up. Lately there's been this funny little show about guitar players. Not people you really know just people who adore music made by guitars, people who know every single possible thing a person could know about guitars. I'm always fascinated by people with such tunnel-visioned passion, in awe really since I'm a generalist by nature, so I like this programme quite a lot.

So the other night I was watching the guitar show and a man there mentioned John Prine. I never thought I'd hear John Prine mentioned on BTV but there you have it. Since my last John Prine cassette got eaten by the car radio from hell, I haven't listened to his music for some time, though I sing it sometimes alone in the car, the one without a radio. The mention of John Prine opened the flood gates and my mind was awash with John Prine memories.

For me John Prine embodies the summers of my adolescence. John Prine means Summerfest in Milwaukee on the shores of windy Lake Michigan. Sunny days when I could wear shorts and halter tops and look like the sexy teenager I was. It means drinking beer when you're under age and making out with your boyfriend who is "older" which means you are dangerous and wild. It was the time when life was so full of potential your paths seem endless and time was infinite.

I don't know how many times I watched John Prine on a stage at Summerfest, just him and his acoustic guitar playing songs so loving they made you cry and so sad they'd hang around your neck for days and so funny you'd still be pissing your pants laughing days later. He was such a humble and sincere performer. I loved him from the first time I saw him on stage before I really listened to his lyrics; for lyrics are where John Prine's magic lives.

One of his saddest songs and most well known is Sam Stone which is likely just as relevant now with all the Iraq veterans going home.

About the truest love song ever written is In Spite of Ourselves, about real life love, the one with flabby guts and farts.

See aren't his lyrics incredible? Listen to Hello in There or Angel from Montgomery or Muhlenburg County or Sins of Memphisto or Unwed Fathers, in fact any of his songs and you will find inspiration.

Once when my sister and her husband were visiting here in Botswana from Colorado, I put a John Prine tape in the cassette player for them to listen to and my brother-in-law said, "Yeah, he's a bit like Jimmy Buffet." I've never heard such an insult! I felt like I'd been stabbed in the heart; for a moment I had to restrain myself from reaching over the seat and giving him a backhand. I liked my brother-in-law a fraction less after that.

I adore John Prine, I even wrote a novel inspired by his song Donald and Lydia, unfortunately it is one of my wallflower novels. John Prine's lyrics are so spot on, so true and right you almost believe he invented the thoughts while he's only the observer; what more can we ask from a writer?
Posted by Lauri at 7:00 AM

Oh!oh!oh! How very right you are. and on top of all that, he was one of the nicest persons you would ever want to meet. I had several acquaintances involved in Chicago's Old Town School of Folk Music and through them I had the opportunity met both John Prine (and Steve Goodman). Prine could be great at SummerFest or the Earl of Old town, but he was better than best in a living room of friends.

Okay Bonita I am seriously jealous! Tell me more please.... You can just tell he is so humble and lovely. I read in Wikipedia he recently got a Grammy. I thought that was wonderful!

And what do you think about my BIL comparing him to Jimmy Buffet. Am I overreacting? It's like comparing a person who paints by numbers to Picasso.

And John Prine also has a wicked sense of humour ... how about -

Please don't bury me
Down in that cold cold ground
No, I'd druther have "em" cut me up
And pass me all around
Throw my brain in a hurricane
And the blind can have my eyes
And the deaf can take both of my ears - If they don't mind the size ...

I sing his songs at my desk to all of our very young coworkers when we are having a "day". Your post brough back lots of good memories ...

Yes Lyn he can be hilarious- like Dear Abby- the last verse from 'Just Married' is a LOL one.

But the other thing- I think he must be one of the best writers when it comes to characterisation. You can see Barbra Lewis at the Hotel Boulderado, you can picture Lydia at the arcade, the Oldest baby in teh World and the stuttering Donald. What other song writer can really do that? Maybe maybe Bruce Springsteen.

Well, you'll probably like me even less than your bro-in-law, since I'd never heard of John Prine before today. But I do like the lyrics to Sam Stone!

He is one of those singer/songwriters who could have been a writer. You hear his lyrics and sort of internally gasp at the imagery and feeling. I haven't listened to John Prine for ages, but I think it's time!

I am astounded actually that people from all over seem to know him, Selma. I really thought he was a Midwestern USA singer.

Hey, Jimmy Buffett and John Prine are old, old friends, they both hung around with Steve Goodman and Keith Sykes. Sure, Prine is the better songwriter, but Buffett, although, he's certainly sold out, holds his own.

I was first introduced to John Prine when a friend gave me a vinyl album called "The Earl of Old Town." Along with Jim Post, another great lyricist and performer, Prine's wit and imagery appealed to me immediately, numbed as it were by the pap of the mid-seventies.

He also has a terrific sense of humor. To wit, "The Accident: A Four-Way Stop Dillema."

So good topic really i like any post talking about STD Symptoms.Us but i want to say thing to u Health not that only ... you can see in Health ideas Trichomonas Definition and more , you shall search in Google and Wikipedia about that .... thanks a gain ,,,