Ian Khama and the Day that Wasn't Friday the 13th 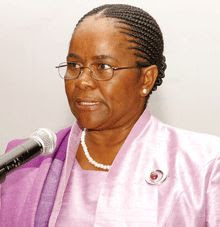 You could have been confused, anybody would have been. Perhaps it was Friday the 13th or April 1st, but it wasn't. It was last Friday, the 21st of August. I was driving home from the shops listening to Gabz FM, my preferred radio station when I can get it, and I get an SMS from my husband in Gaborone- "Radio Botswana- Emergency Speech by the President". So I quickly change the station and enter mid-speech. The first thing I realised was the person speaking spoke in first person but the person was not the President of Botswana. Later I realised it was the new director of broadcasting services, the boss of BTV, Daily News, and Radio Botswana, Mr. Mogomotsi Kaboeamodimo, a civil servant. He was standing in as the president. That alone was bizarre. One would think if the president has something so urgent to tell the nation he might have taken time out of his schedule to do just that- tell the nation. Instead he chose to pull the new director down into the quagmire and compromise his integrity too.
The speech was about the personal beef between President Ian Khama (of the "A Team") and Gomolemo Motswaledi (from the Barataphati Faction) both members of the Botswana Democratic Party. The factions have been wrestling each other for power in a dirty, public battle. So the President felt it was suitable to tell his side of the story on the public owned media, for he didn't just use the civil servant to read his political message on Radio Botswana, he did the same on BTV and he did it numerous times throughout the day.
To compound all of this we are coming up on a national election. Besides the fact that the President used public assets for his own personal agenda, a case can be made that the address was a form of advertisement for the BDP.
In yesterday's Mmegi, Minister of Communications, Science and Technology, the ministry that controls the state media, Ms Pelonomi Venson- Moitoi had nothing to say. What did anyone expect given her heavy handed, barely hidden attempt to regulate the press with the recent Media Bill, now law, that requires journalists to get permission to operate from a council set up by politicians?
Friday happened and as the editorial in the same issue of Mmegi portends, "Friday was a new low in government media abuse by BDP". Watching the BTV version of the speech after the 9pm news on Friday, I couldn't quite believe the audacity of the whole thing. Botswana has never experienced such blatant disrespect for the electorate. I felt very sad and for the first time, scared. We are in for some rough times ahead I'm afraid.
Posted by Lauri at 11:33 AM

Politicians are not so different, no matter where you live, it seems. Tactics and the extent of the abuse may vary, but probably only in degrees. I think populations across the globe are getting fed up with politicians.

I hope things don't get out of hand for you and your country.

I am to the point that I don't listen to the news.

The tragedy for me Lauri, is that people are only hung up on the fact that Kaboeamodimo is a civil servant. So what are they saying? That if they used Batlang Serema (BDP exec secretary) it would have been fine?That BDP is welcome to use national assets for their (partisan) interests? And the chutzpah of that woman Festinah Bakwena (PS-MCST) that it was a matter of "national importance". Wow! She never explained to slow people like me how firing a party official (who doesnt even hold any state office) is a big deal for us as a nation. Equally disappointing is the fact that people have muddled issues. I for one dont care if Motswaledi was given an opportunity for rebuttal or not. All I care is that people should make a distinction between national issues (for which national resources can be legitimately appropriated) and party issues (where they have to pay their own way just like everybody else). The only positive thing to come out of all this is that Kahama is doing to (certain) BDP members what they have always condoned when it was done against others (esp opposition parties). How many times have opposition parties complained about abuse of state resources (like BDF helicopters, State Media, Ministerial/official cars) for party functions? Nobody (including our new found "heroes" -Motswaledi and Kwelagobe) in the BDP found anything wrong with it (why should they?They were benifitting from it all). Infact at the height of their factional war early this year,DK's faction complained that he doesnt get a "lift" (anymore) on the VIP aircrafts to perform his duties as BDP chairman. We have a setswana saying "molaakgosi o a mo itaela". Which means if you encourage those in power to be unjust towards others, tomorrow they will be unjust to you-because that is what you taught them. Ian is doin what has always been done. The only difference is that at least he is not a hypocrite. He applies to BDP the rules that other BDP leaders from his father to Mogae applied only to the rest of the nation (while refraining from appying them to their 'comrades') .Such abuse of power by our presidents is nothing new. We need to make our leaders accountable. When i was a student in Australia John Howard was still a PM. Once while on an official trip (ASEAN meeting) on his way back he decided to make a stopover in the northern parts of Australia (Broome) for a two week hoilday. The public demanded (and he relented) that he pay at least the equivalent of two commercial flights for using the VIP flight for private matters.(http://www.theaustralian.news.com.au/story/0,20867,21077231-601,00.html). What's more he was rapped in the knuckles for hosting 'friends' who were his (Liberal) party fundraisers at his official residence in Sydney. It was viewed as improper use of state resources availed to him as a leader.
Doubt if that will happen in our precious Botswana. To paraphrase former Israeli PM "I would be proud of being a citizen of a country that investigates its Presidents". If Israel (probably the most security conscious country in the world) can investigate its incumbent PM and President without risking national security and stability why cant we? We need accountable leadership. But first we need BDP big whigs to speak out when others are being disadvantaged, for they know not when they will be next.

You also make a good point Kwelagobe is not the friend to democracy. At the time of the congress he was the enemy of my enemy is my friend, but that's not the best position to be in.

So waht do you think will be the fall out from this? Or is it already forgotten like so many things in Botswana?

Ian Khama made one misstep after the other.
Admittedly I have the imression that he
is not very intelligent...otherweise he would have hired his family law firm CollinsNewman&Co.to publish their opinion on his performance as a Prseident.

Never has he heard about"conflict of interest?"

So...now he got himself into court proceedings and brought more animosity into his own ranks.

Hopefully Ian Khama will learn one day,that in a democracy he can not make unilateral decisions,especially as a Chairman of his own party.